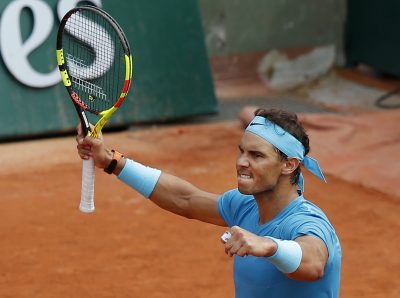 World No. 1 Rafael Nadal has rubbished Frenchman Richard Gasquet’s claim that he was unbeatable on Parisian clay.

Gasquet was beaten comprehensively by Nadal in their French Open third round clash on Friday. The Spaniard was in a ruthless mood as he breezed through to 6-3, 6-2, 6-2 win, taking himself closer to a record extending 11th title in Paris.

Speaking to reporters after his loss to Nadal, Gasquet claimed the 16-time Grand Slam champion couldn’t be defeated on the red dirt, a claim Nadal later played down in his press conference.

“Well, I don’t know what the others think. All I know is about me,” Nadal said.

“What I know is I go to the court, and I know that I could very well lose.

“Of course I have won a lot, and it can maybe influence my opponents. But that’s their thing. It’s their problem. I can’t answer about that.”

Nadal’s uncle and former coach Toni Nadal is in Paris to watch his nephew’s progress in Paris. The southpaw cleared the air regarding Toni’s involvement as coach, stating that his uncle was not working with him anymore.

“He’s my uncle. He’s here,” he added. “He’s a very important person for me. He’s here, I think, until Monday. I don’t know. Maybe it will be great if he stays more, if I’m still here.

“No, no, no, no issue about that, no? Nothing strange. He was in Monte-Carlo – no, he was in Barcelona a couple of days. He was in Madrid, too.

“I proposed him to come to Rome, but he could not come because he had work to do with his things, so he could not manage it.

“And he’s here and happy to see him here. That’s all.”