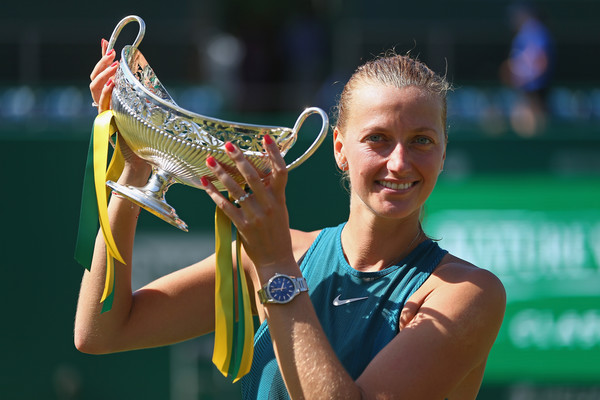 Petra Kvitova beat Magdalena Rybarikova 4-6 6-1 6-2 to become the first woman to defend her title in Birmingham since Maria Sharapova in 2005.

The Czech is enjoying a brilliant year on the WTA tour. She has now won five trophies, has a win-loss record of 37-7 and will move up to second in the Race to Singapore behind Simona Halep.

It all sets the Kvitova up very nicely to try and win her third Wimbledon title. However, she has only reached one Grand Slam final since she returned from her hand injury, and she explained why she thinks that might be.

“The reason probably is that I want it too much,” she said. “In Melbourne I didn’t practice for two weeks before so it was difficult to reach the level I wanted.”

“At the French Open I feel like I was pretty close. It was really sad for me to lose two tie-breakers and it took me a while to get over it.”

“But it doesn’t matter what happens in Wimbledon because I’m already happy with my season and I couldn’t imagine that I would already have five titles by this time of the year.” 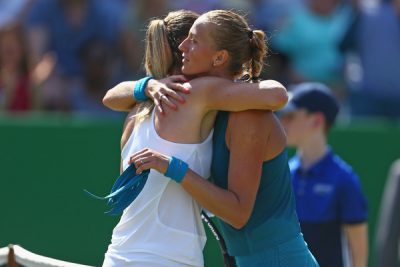 Kvitova struggled on serve in the opening set, and Rybarikova pounced on her weak second serves to break her to love on two occasions.

In between those breaks, the Czech battled to a break of her own. However, the Slovakian remained far too consistent on her serve to give the two-time Wimbledon champion another chance in the set.

The match turned in the third game of the second set. Kvitova was leading 2-0 but she faced a break point on her serve. Rybarikova failed to take advantage and did not get another opportunity as the Czech levelled the match in a hurry.

To change the momentum in the decider, the Slovakian needed to ensure she held serve. And she had a chance to do exactly that in the opening game.

However, she could not break through Kvitova’s defences and the Czech went on to earn a crucial break.

The 2017 champion never really looked back after that. She broke Rybarikova twice more and, although she dropped her own serve once, the outcome of the set was predictable.

Kvitova wasted her first match point when she hit a backhand long in game seven. But it not matter one bit, as the Czech held to love in the next game and clinched victory with an ace.

“The first was tough,” Kvitova said. “I had my chances, but she was just a little bit better. I tried to be more patient (after that) and not hit winners from the first shot.”

“Probably the most important game was when I broke her in the first game of the second set, and the same in third set. Those breaks made me more relaxed.”