Elina Svitolina: I Always Have The Highest Goals For Every Tournament - UBITENNIS 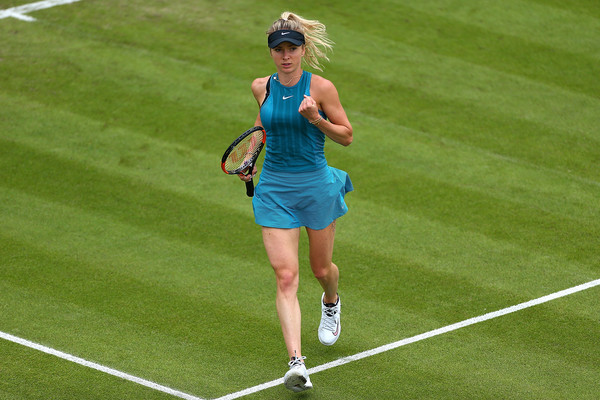 Elina Svitolina advanced to the quarter-final in Birmingham for the first time after a comfortable 6-4 6-2 win over Alize Cornet and admitted afterwards that she is thinking about the title.

“It’s always the goal for me to win the tournament,” she said. “I take it one day at a time, but in my mind I always have the highest goals for every tournament I enter.”

The Ukrainian had to be patient against Cornet as the Frenchwoman served well for most of the opening set, which made her hard to break down.

However, the World No.41 did have one bad service game and, after watching three break points go by, Svitolina took her fourth chance to move ahead. That break was all she needed to win the first set 6-4.

Despite a more emphatic scoreline, the second set was far less predictable. Cornet had three chances to break in game two, and could have mounted a comeback if she had taken any of them.

Instead, those misses proved very costly for the Frenchwoman as Svitolina broke her in games three and five to set her on course to win the set 6-2.

Svitolina pleased with her consistency 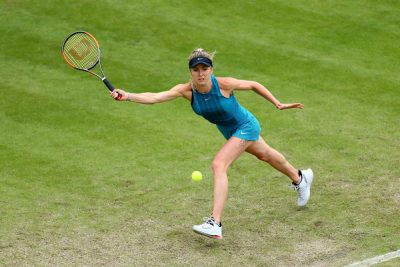 The Ukrainian will now compete in only her second grass court quarter-final since she turned professional in 2010, and she believes most of her past struggles on the surface were psychological.

“Mentally I was more struggling more than anything else,” she said. “In general, I’m getting better. Hard court, clay court, I’m more consistent. That’s why I think I’m playing better, (because I’m) more consistent at all the tournaments.”

Svitolina continued, “That’s the goal for everyone: to play well and be consistent because the season is very, very long.”

“So that’s why I know, to be on top of the women’s ranking you have to play well all season, at every tournament, no matter what surface.”

The Ukrainian’s opponent in the last eight will be Mihaela Buzarnescu, who fought back from a set down to beat Petra Martic 4-6 6-3 6-2.

The Romanian, 30, stunned Svitolina in the second round of the French Open just a few weeks ago, so now the World No.5 has a chance to get some revenge.

Magdalena Rybarikova: I Know What To Do On Grass