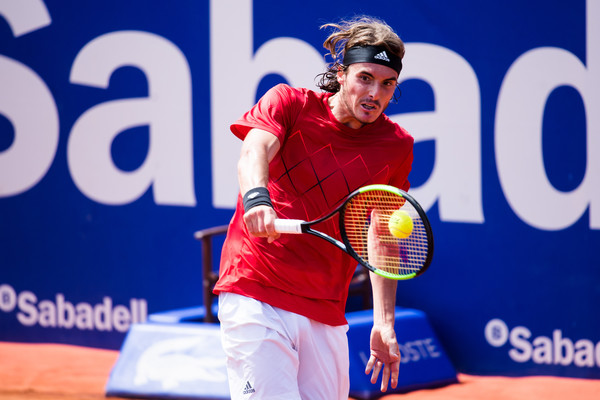 Stefanos Tsitsipas came back from a set down to beat Kevin Anderson 6-7(3) 6-3 6-3 and book his place in the quarter-finals of the Millenium Estoril Open.

The Greek is in impressive form on the clay courts of Europe. He qualified for the main draw of the Monte Carlo Masters and made it to the second round, and then beat Dominic Thiem and Pablo Carreno Busta en route to the final in Barcelona.

These excellent results have propelled Tsitsipas up the world rankings. He began April at 69, started this week in Estoril at 44, and could rise as high as 33 if he wins the tournament.

The newly-installed World No.44 continued his excellent clay swing after losing a tight first set 7-3 in the tie-break after neither player dropped their serve during the opening twelve games of the match.

The Greek, 20, roared back in the second set. Anderson had been dominant on serve in the opener but Tsitsipas found a way to win a few points on the South African’s first serve and over half of the points on his second.

This made a crucial difference, as the Greek earned the first break of the match in game six and went on to clinch the second set 6-3.

The deciding set followed a similar pattern, as Tsitsipas broke Anderson in the fifth game to go ahead. He then broke again in game nine to seal victory.

Carballes Baena up next for Tsitsipas

The World No.44 will now play Roberto Carballes Baena in the last eight after the Spaniard backed up his first-round win over Bjorn Fratangelo by beating Cameron Norrie 5-7 6-2 7-6(1).

Carballes Baena almost did not win at all as he faced three match points at 4-5 in the decider. However, he clawed his way back from 0-40 and eventually forced a tie-break, which he won convincingly.