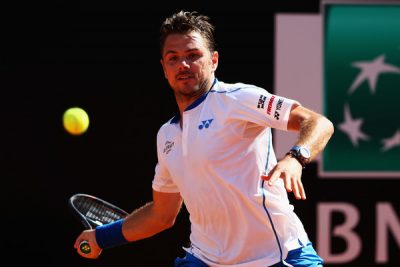 Three time grand slam champion, Stan Wawrinka has suffered another setback after he lost his 1st round match in Rome to Steve Johnson 6-4 6-4.

The world number 25 was making his first appearance on the ATP World Tour since retiring in February at the ATP 250 event in Marseille as he made a quick start to proceedings. The first set provided with some good serving as both players were looking to make a quick start. However Wawrinka couldn’t find enough first serves towards the end of the set as his American opponent capitalised, breaking on his first break point of the match. The 28 year old Californian served out the opening set in 36 minutes.

The second set saw both men become more aggressive on return as break point opportunities were created more regularly. The world number 52 started to move Wawrinka around the court as he looked to continue his solid play against the former world number three. Eventually Wawrinka ran out of ideas in the end as he was broken in the seventh game for a 4-3 lead. After a few nervy points, Johnson constructed some very good points and after 1 hour and 21 minutes he converted his first match point to seal a very good win.

The result means that Wawrinka suffers yet another setback to his season as he now has a 3-5 record in 2018. However the former Roland Garros champion will be happy to be back on court and will look to fine tune his game with Magnus Norman before the second grand slam of the season, where he defends final points.

On the other side of the net it is a very good win for Johnson who will now play either fellow American Jared Donaldson or 10th seed Pablo Carreno Busta.

In other results, Italian wildcard Lorenzo Sonego grabbed his maiden masters 1000 victory with a 2-6 7-6(4) victory over Adrian Mannarino while 13th seed Jack Sock grabbed a much needed victory over David Ferrer, 6-3 6-4. Sonego will play either Sam Querrey or Peter Gojowczyk while Sock earns a match with Karen Khachanov or Philipp Kohlschreiber.