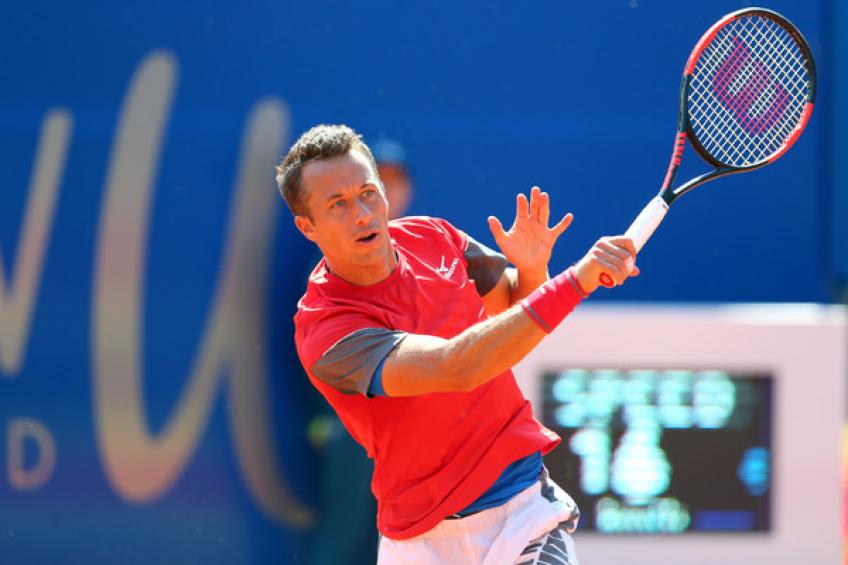 The German veteran dropped just 11 points in his 11 service games and never faced a break point. Karlovic faced six break points and dropped his serve once in each set.

Karlovic saved a break point in the third game of the opening set with a volley winner. Kohlschreiber earned three break points when he went up 0-40 in the seventh game, but Karlovic hit two service winners and a volley winner to save the three opportunities. The German 34-year-old player got the break in the 11th game with a volley winner earning the chance to serve for the first set. He closed out the set with three winners in the 12th game.

The second set went on serve in the first four games before Kohlschreiber got the break with two forehand winners to to take a 3-2 lead. The home player, who won the Munich title in 2007, 2012 and 2016, sealed the win with four winners in the 10th game.

Norwegian Next Gen Casper Ruud beat Marius Copil 7-6 6-3 in 1 hour and 15 minutes to take his first win on the ATP Tour in three months. There were just six break points in this match. Ruud, who lost the ATP Challenger final against Gianluigi Quinzi, saved two break points to hold his service games. After a first set with just one deuce on Ruud’s serve the Norwegian got three mini-breaks to win the tie-break 7-3. In the second set Ruud fended off two break points at 1-2 and broke serve twice in the seventh and ninth games to win the final four games and clinched the second set by 6-3. Casper’s father Christian was a former world number 39 player, who reached the Australian Open fourth round in 1997.

Marco Cecchinato followed up his maiden ATP title in Budapest with a 5-7 6-3 6-2 win over his compatriot Fabio Fognini in an all-Italian first round match. In the opening set Cecchinato converted his fourth break point at deuce and held his serve at 15 to open up a 3-0 lead. Fognini bounced back by winning five consecutive games with two consecutive breaks to take a 5-3 lead. Cecchinato broke back in the 10th game at deuce to draw level to 5-5. Fognini converted his third break point in the 11th game at deuce with a backhand passing shot and served out at 30 to clinch the first set 7-5.

Cecchinato broke serve on his second opportunity in the third game with a double break from Fognini to win the second set 6-3 to force the match to the decisive set. The Palermo-native player earned a double break in the first and fifth games to clinch the third set after 1 hour and 49 minutes setting up a second round match against Marton Fucsovics.

Mirza Basic overcame Gael Monfils 6-2 3-6 6-3 in 1 hour and 35 minutes to score the 10th win of the season. The Bosnian player dropped serve twice and earned ten break points. Monfils, who played his first match since Indian Wells, was broken four times. Basic got his first break in the third game, when Monfils sent a backhand long. Basic dropped just three points on his serve.

Monfils dropped his serve at 2-4 after a poor drop-shot. Basic served out for the set after Monfils made another drop-shot error.

Alexander Zverev will make his debut tomorrow against Yannick Hanfmann on the Central Court.