Maria Sharapova Battles into Round 2 in Paris - UBITENNIS 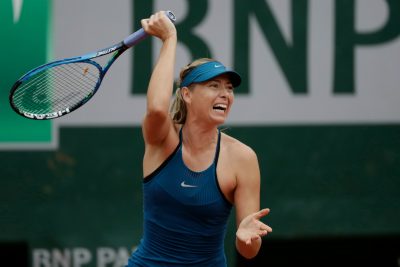 Former two-time champion Maria Sharapova progressed through to the second round of the French Open, taking out qualifier Richel Hogenkamp 6-1, 4-6, 6-3 in a wild, tense battle in Paris on Tuesday.

Sharapova got off to a flying start in her first match at the French Open in two years, allowing her adversary just two points in the initial three games to take a quick 3-0 lead in the opening set. As the Russian grew in confidence, her opponent simply couldn’t compete at all.

She began to give it away and eventually the first set became a no contest as the growing number of unforced errors from Hogenkamp made it that much easier for the five-time Grand Slam champion. In the end, it turned out to be a very easy set for Maria as she took it 6-1 in just 26 minutes.

Sharapova began the second set from where she left off in set No. 1 as she secured an immediate break of serve. She quickly raced to a 3-1 lead when the drama began to unfold. Hogenkamp started a remarkable turnaround as she played absolutely amazing tennis to first level the scores at 3 games apiece before gaining a 5-4 advantage.

As Sharapova served to stay in the set, the World No. 133 put her under a tremendous amount of pressure. With the pressure increasing, Sharapova’s game began to unravel. A lucky net chord put Hogenkamp just two points away from the set and moments later she did win it in 46 minutes as the Siberian committed back-to-back unforced errors.

Hogenkamp continued with her strategy of being the aggressor as the ploy was paying her rich dividends. She held on to her serve with the utmost ease in the first game of the deciding set. Sharapova on the other hand had problems of plenty as she didn’t do enough with a drive volley and eventually lose her serve, which gave Hogenkamp a 2-0 lead.

A little while later Hogenkamp made it 3-0. But, then champions are made of a different material altogether and Sharapova showed why she is such a great champion. She tightened the screws before launching an all-out assault to put the match back on an even keel at 3 games all. In the next game, the continuous big hitting from Sharapova saw her challenger scrambling from one part to the other of the court.

Hogenkamp was still unable to find answers to Sharapova’s ultra aggressive stroke-making, handing her a crucial 4-3 lead. Indeed, Sharapova’s strength of will and insistence of character was admirable as she made it 5-3 after a tough hold of serve. Sharapova was again on the charge in the next game as she advanced to the second round after prevailing in a punishing see-saw battle, which she won in just under two hours.