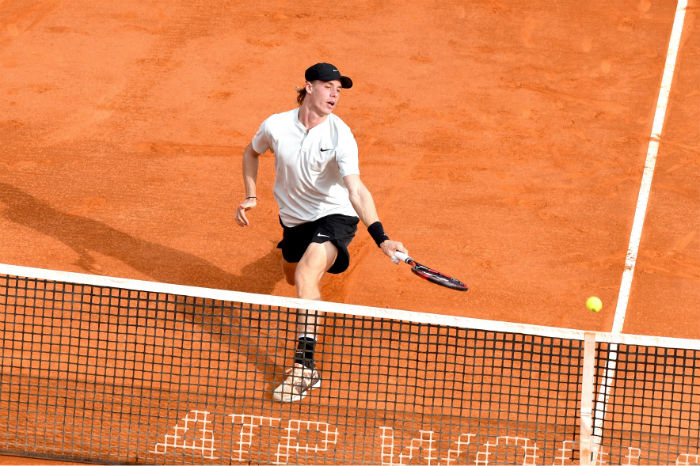 Denis Shapovalov came back from one set down to beat number 15 seed and 2013 semifinalist Tomas Berdych in a final set tie-break 1-6 6-3 7-6 (7-5) in one of the most intriguing matches of the Tuesday programme of the BNL Internazionali d’Italia at the Foro Italico in Rome.

It was a clash between two different generations, a veteran player on one side and a Next Gen star on the other side. Shapovalov came into the Rome event one week after reaching the second Masters 1000 semifinal of his young career last week in Madrid. Before Madrid the 19-year-old Canadian player had not achieved any wins on clay at ATP level. He has now clinched five wins in two Masters 1000 tournaments. He became the third youngest player in history to reach the semifinal of the Madrid Masters 1000 tournament after Rafael Nadal and Richard Gasquet. He followed up this achievement with a hard-fought win over Berdych.

Berdych and Shapovalov met for the second time in their careers one year after their first head-to-head clash at the Queen’s, where the Czech veteran beat his younger rival 7-5 in the third set.

Berdych broke twice in the second and fourth games to race out to a 5-0 lead in the opening set, as Shapovalov made forehand errors. Shapovalov failed to convert two break points at 1-5, before Berdych wrapped up the first set on his third set point after 37 minutes.

Shapovalov bounced back by breaking serve in the fourth game to take a 3-1 lead after Berdych netted a forehand. The Canadian world number 29 player converted his third set point in a seven-minute ninth game at 5-3, when Berdych hit a crosscourt backhand into the net.

Berdych rallied from 0-30 down by winning four consecutive points at 4-4 in the third set to hold serve. The Czech player came within two points in the next game but Shapvalov bounced back to force the third set to the tie-break. Shapovalov reeled off the first four points of the tie-break, but Berdych won five of the next six points to draw level to 5-5. Shapovalov won the final two points to clinch a tight match. Shapovalov made 36 winners to 52 unforced errors.

Shapovalov will become the top Canadian ranked player overtaking Milos Raonic, who had taken the position of best player from his country since 2010.

Shapovalov will face Robin Haase in the second round. They will meet for the first time in their careers.

Seppi went down 0-40 in the first game of the opening set. He managed to claw his way back to 40-40 but dropped his serve at deuce, after Pouille hit two forehand winners down the line. At 3-1 Pouille went up a double break and held on to his next service games to close out the first set 6-2 after 28 minutes.

Seppi got the only break of the second set to force the match to the decider. The Italian player got a break to take a 3-2 lead, before Pouille converted his first match point in the decisive tie-break.

The Frenchman set up a second round match against this year’s Australian Open semifinalist Kyle Edmund, who beat Tunisian qualifier Malek Jaziri in three sets.

Pouille leads 2-1 in his previous head-to-head matches against Edmund.

As Jo-Wilfried Tsonga Withdraws, Other French Players Struggle Ahead Of Roland Garros