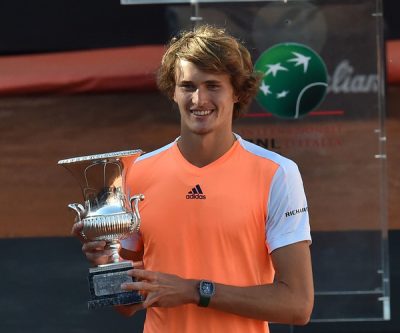 The top seeded Spaniard will start his campaign against either Fernando Verdasco or Bosnian Damir Dzumhur. The top seed will have to win Rome if he wants to regain his world number one spot after his quarter-final loss to his Austrian foe in Madrid. Another noticeable round one match in Nadal’s section is 15th seed taking on Canadian youngster Denis Shapovalov.

Meanwhile Thiem, who could face Nadal again in Rome has the winner of a blockbuster match between home favourite Fabio Fognini and French entertainer Gael Monfils. The other seed that appears in the Austrian’s section is 12th seed Sam Querrey, who begins his campaign against Peter Gojowczyk.

The second quarter of the draw sees 3rd seed Grigor Dimitrov, who has been handed yet another difficult draw as he will face either Kei Nishikori or Feliciano Lopez in his debut match in Rome. The other seed in the Bulgarian’s section is 13th seed Jack Sock, who takes on a returning David Ferrer in round one.

The other two big seeds in this blockbuster section are 8th seed John Isner and former champion, Novak Djokovic. Isner, who reached the last four here last year will play either Albert Ramos-Vinolas or a qualifier in his first match. Meanwhile Djokovic, who reached the final here last year, will take on Ukrainian Alexandr Dolgopolov in his first round contest. The Serbian is in need of some big wins this week or he could see his ranking slip down just before Roland Garros.

In the bottom half of the draw, 7th seed Kevin Anderson will play either Aljaz Bedene or Gilles Muller in his first match. The South African could then face Stan Wawrinka or Pablo Carreno Busta in the third round. Wawrinka, who will play his first match since February will start against Steve Johnson. The likes of Marin Cilic, Diego Schwartzman and Richard Gasquet complete the third section with the latter playing against fellow Frenchman, Benoit Paire.

The final section of the draw sees 2nd seed and defending champion, Alexander Zverev get handed a relatively easy draw as he will face either Matteo Berrettini or a qualifier in his first match. An out of sorts Lucas Pouille or Kyle Edmund could await in the third round for the young German.

Completing the top eight seeds is Juan Martin Del Potro as he could face Borna Coric in his first match in what is set to be a match of epic proportions. The likes of David Goffin and Pablo Cuevas also feature in the Argentinian’s section of the draw.

Here is the full draw, with main draw action beginning on Sunday: