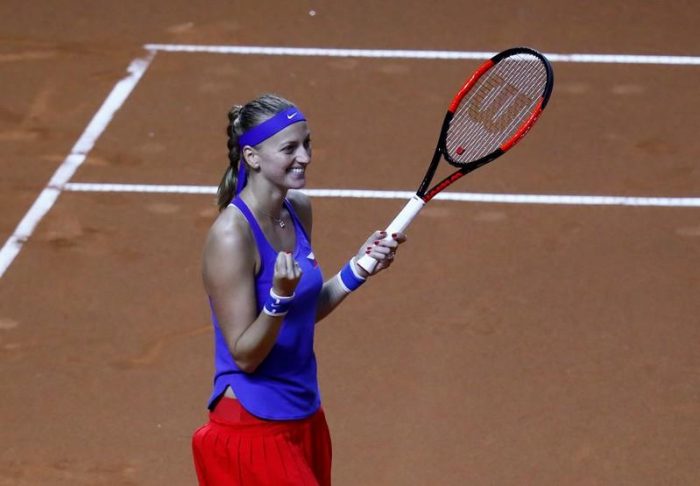 The Czech Republic will play in their sixth Fed Cup final in eight years following a dominant 4-1 win over Germany at the Porsche Arena in Stuttgart.

After winning both of their singles matches on Saturday, the Czech team was given a run for their money by their opponents on day two. In the opening match Julia Goerges revived German chances with a 6-4, 6-2, triumph over world No.6 Karolina Pliskova. Producing a total of eight aces and 26 winners in the match.

German hopes were dashed in the match that followed Goerges’ win. Two-time Wimbledon champion Petra Kvitova held her nerve to edge out Angelique Kerber 6-2, 6-2, in just 58 minutes. Heading into the encounter the two players were level in their head-to-head at 5-5, but their latest meeting was one-way traffic in Kvitova’s favour. Kvitova produced a total of 31 winners compared to her rivals tally of only seven.

“I am very relieved. I was getting nervous before this game,” Kvitova told AFP news.“We had a great position from yesterday, I think Julia played a really good match.
“I knew we still needed one point from our last two games and I just did my best.”

The mood of the home team worsened further in the final match. The Czech duo of Barbora Strycova and Katerina Siniakova was leading 7-5 in their doubles match before their rivals, Goerges and Anna-Lena Groenefeld, retired injured.

“It will take a while to get over it,” Kerber commented about the result of the tie. “We all know that was a great opportunity for us,” she added.

The Czech Republic will be bidding to win the team tournament for the 11th time. They are the second most successful team in the history of the competition in terms of trophies won.

Facing the Czech team in the final will be reigning champions the USA. Taking on France in their semifinal clash, they managed to prevail by winning both of their Sunday matches in the singles after being tamed at 1-1 on the opening day of the tie.

Sloane Stephens got the ball rolling with a 6-2, 6-0, thrashing of Kristina Mladenovic. The US Open champion was in an unforgiving mood as she dictated play from the onset. Converting five of her six break point chances and capitalising on Mladenovic’s below-par second service rate of 38%.

“That was a really good one. You never anticipate a scoreline like the way it turned out but it was really solid,” Stephens evaluated about her performance.

The unassailable lead for America was then clinched by Madison Keys. Despite some stern resistance by world No.122 Pauline Parmentier, the 23-year-old battled to a 7-6(4), 6-4 lead. Saving eight out of the 11 break points she faced.

“I was really nervous – I wanted to be the one who got the winning point. I was so sad I couldn’t play in the final last year because of my wrist injury.” Keys told fedcup.com. “Fed Cup is special. It captures the extremes of highs and lows in tennis. It takes me days to recover from a Fed Cup loss, whereas with a normal match within a day you’re bouncing back – but the wins are incredible.”

A chance for revenge

Historically, America has been a nightmare competitor for the Czech Republic in the Fed Cup. They have clashed 12 times since 1980 with the American’s winning 10 of those, including one last year. The last time the European nation triumphed was when they played under the name of Czechoslovakia back in 1985.

“Every time it feels exciting and we are happy to be in the final.” Said Kvitova. “Maybe I (would prefer to play) France, USA you never know they have some great players but any team that is in the final has great players.”

American team captain Kathy Rinaldi now has the chance to guide her country to back-to-back titles for the first time since 2000. America is already the most decorated team in the Fed Cup with 18 trophies to their name.

“The girls did so well, both today and yesterday. We are very fortunate to have such a strong group and now we are looking forward to what is going to be a great final,” U.S. captain Kathy Rinaldi said.

The Czech Republic will host the final in November at a yet to be confirmed venue.