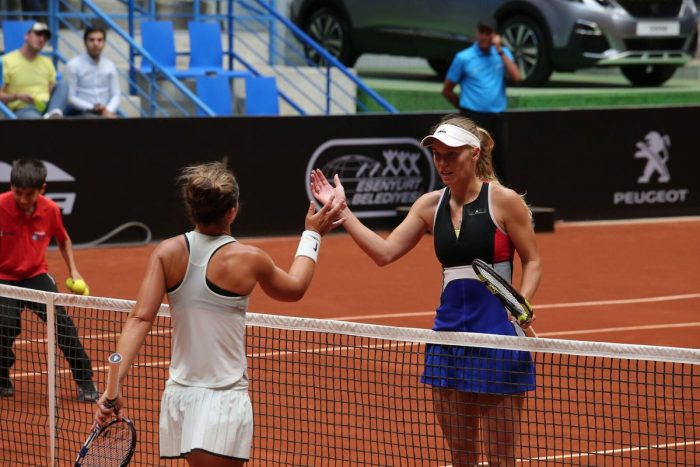 World Number 2 and this year’s Australian Open champion Caroline Woznacki had to dig deep to beat Italian star Sara Errani 5-7 6-3 6-3 after 2 hours and 26 minutes at the WTA International tournament in Istanbul.

Errani won the first set before Wozniacki turned around the match in the second set. The Italian player, who had won just one game in their most recent match at the 2014 US Open, dropped her serve seven times from the eleven break points she faced. Wozniacki faced 12 break points in the first set, but Errani created just two opportunities in the second and third sets.

Errani broke serve in the fifth and seventh games to build up a 5-2 lead. The Dane saved a set point on her return and got one break back in the 8th game. Errani did not convert her second set point on her serve at 5-4. Errani broke on her sixth break point chance in a very long 11th game and held serve at 30 in the next game to close out the opening set 7-5.

Wozniacki went up a double break to open up a 4-0 lead en route to winning the second set 6-3. Wozniacki dropped her serve once, but broke twice in the first and fifth games. Errani dropped her serve again, as she was serving to stay in the match at 3-5.

“In the first set I made too many unforced errors, but I cut that down in the second and third set. On the clay it’s important to be able to play defense, because there are longer rallies, but at the same time, if you have a short ball, you have to attack. I am trying to find that balance. It’s not easy, especially in the first tournament of the year”, said Wozniacki during the post-match press conference.

Wozniacki will face French player Pauline Parmentier. who beat Yulia Putintseva 6-2 2-6 6-3 to reach her first quarter final of the year.

Donna Vekic cruised past Anja Tomljanovic 6-1 6-2 in 1 hour and 11 minutes in their second head-to-head match. Vekic served at 48 %, but dropped just 12 points in her eight service games. The Croatian player converted on four of her ten break point chances. She went up a double break in the second and sixth games to close out the first set. She got a double break at the start of the second set and sealed the win with a hold of serve in the 8th game.

Anett Kontaveit moves into the quarter finals in Stuttgart, as Angelique Kerber retires from the match injured