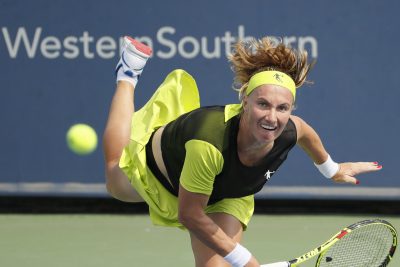 Kuznetsova, a former Roland Garros and US Open winner is out of the game due to a wrist injury.

The Russian in conversation with Sport360 disclosed what all transpired after she got to know the extent of her injury. With increasing pain disallowing her to play at her best, she decided to consult specialists. But, she couldn’t make up her mind whether to go under the knife or not as different doctors gave different opinions.

However, when she went to visit former World No. 1 Clijsters in Belgium and spoke to the Belgian, she finally decided to have surgery on her troublesome wrist. During her stay with Clijsters, an extremely funny episode unfolded when she was out with the former top ranked player in the world.

Kuznetsova said: “I injured my wrist at the US Open and the doctors there told me that after two weeks of rest I’ll be fine. Then I rested for two weeks and flew to China and it’s nothing like fine, it’s the same pain. Then I sent my MRI to different doctors and got like five different opinions. It’s not easy to take the decision. Plus I went to Moscow and saw other doctors, then I went to Belgium, then I had offers to go to the States, to Germany, to different kinds of clinics and it’s hard because everybody gives you a different opinion. So I’ve chosen mine and I don’t regret it so hopefully it’ll work out.”

“I had the surgery in Belgium. Doctor Frederik Verstreken, who operated on Kim Clijsters and Belinda Bencic. I spoke to Belinda before surgery, I spoke to Kim. I had dinner with Kim and went to see her daughter play basketball and to a basketball game of the team her husband is coaching and I went to her home.”

“We were sitting in the kitchen and she said ‘it’s crazy I can’t believe you’re sitting in my kitchen in Belgium’. It was fun. She was feeding her pig, she has pigs and chicken and stuff like that, and then we went to the basketball game and then someone called her and told her she forgot to close the gate and the pig was in the street. It was really funny and I enjoyed some time with her, it was great.”

“She told me your wrist will be like this thin, we laughed. We talked about old stuff, the things we faced being a tennis player, your experiences, I told her my story, she told me hers. It was very interesting.”

Serena Williams will be back to her best at the French Open: Coach