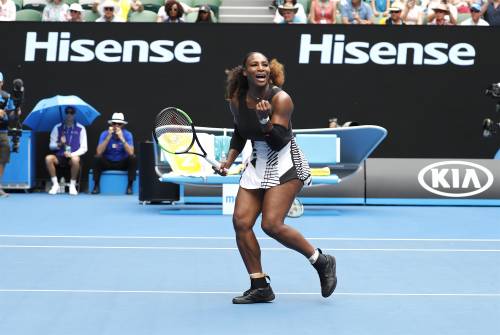 18-time grand slam champion Chris Evert believes Wimbledon will be the best surface for Serena Williams to shine as she prepares to return to the WTA Tour this month.

The 36-year-old started her comeback with a low-key appearance in America’s Fed Cup draw against the Netherlands. Partnering sister Venus, they lost their match in straight sets. Williams hasn’t played a singles match on the tour since winning the 2017 Australian Open. Last year she gave birth to her first child before suffering a series of medical complications afterwards that left her bed bound for six weeks.

Speaking about the former world No.1, Evert has backed her to win more grand slam titles in the future. Although she admits that her chances vary depending on the surface she is playing on. Williams currently has 23 major trophies to her name, just one behind Margaret Court’s all-time record.

”Who knows how she’ll come out of the starting gate,” Evert told The Associated Press. ”Wimbledon, that would be her best shot because that favors power, rewards power and the rallies aren’t long. She’s got the big serve. The U.S. Open is going to be tough because it’s on a hard court, it’s hot. She’ll have to be moving well and be very, very fit.”

Due to a lengthy absence, some are wondering if Williams can return back to the top of the game. During her career, she has won 72 WTA titles and spent 319 weeks at the top of the WTA rankings. Now tasked with managing motherhood alongside a tennis career, Evert believes that the challenge will spur her on.

”When you have a child, that’s an emotional component that you’ve never experienced before,” she explains. ”I keep saying this—whenever anybody doubts Serena, she thrives. That gives her more motivation, more inventive and she always comes out the winner.”

Williams is set to continue her comeback at the BNP Paribas Open in Indian Wells, which will get underway this week. Ahead of the Californian tournament, she will also play her first Tie Break Tens tournament in New York on Monday.

Serena Williams Lights Up Tie Break Tens Event, But It Was Svitolina Who Was Supreme