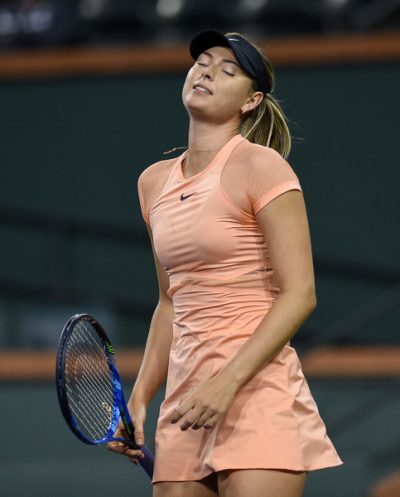 More doubts have been raised over Maria Sharapova’s future as the five time grand slam champion has withdrawn from Miami due to a left forearm injury.

The Russian has had a tough few weeks as after her first round exit in Indian Wells to Naomi Osaka, Sharapova ended her long time coaching relationship with Sven Groeneveld. However her problems have not ended there as today she announced her withdrawal from next week’s Miami Open due to a reoccurring left forearm injury. This is what the former world number one had to say, “I am really sorry that I have to withdrawal from one of my favourite tournaments with my left forearm injury. I am doing everything possible to return to the tour as soon as possible.”

Miami’s tournament director, James Blake, expressed his sympathies with the Russian, “I know how much Maria wanted to play Miami this year, so I can imagine her disappointment,” said Blake. “We were looking forward to seeing her play Wednesday, but unfortunately injuries are part of the game. We hope she recovers quickly and is back on the court soon.”

The 30 year old has had a number of injuries throughout her career and this is another setback in returning to the top of her game. Maria Sharapova will now be replaced by American Jennifer Brady in the main draw, with the actual draw for the event taking place on Sunday at 6pm local time.

Milos Raonic In Search Of Consistency Ahead Of Semi-Final Clash