Jelena Ostapenko: "I was fighting hard against Petra Kvitova" - UBITENNIS 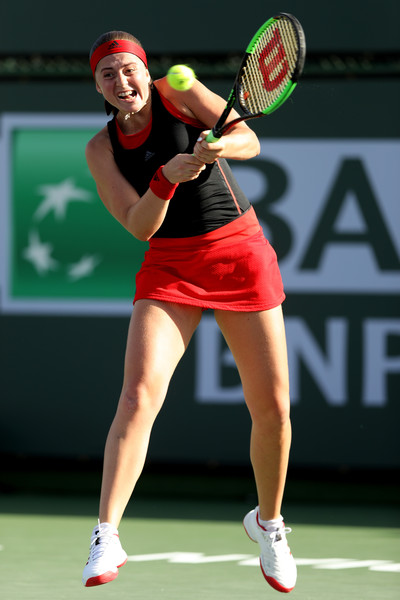 Ostapenko claimed the seventh win against a top-10 player of her career and her first in 2018 and beat Kvitova for the first time since the Round of 16 in Birmingham in 2016. The number 5 seed from Latvia scored two consecutive main draw wins for the second time in 2018 after the Australian Open.

Ostapenko got a break in the fourth game to open up a 4-1 lead. Kvitova broke back in the seventh game for 3-4. Ostapenko held a set point at 6-5 but Kvitova forced the first set to tie-break where she got a mini-break to take a 4-2 lead. Ostapenko turned around the set reeling off the final five points to clinch the first set 7-4.

The match was interrupted after midnight after Ostapenko clinched the tie-break. Osatepnko got a break in the seventh game to take a 4-3 lead in the second set. Kvitova made a double fault to face a match point at 3-5. Ostapenko converted it with a double break to close out the match after 1 hour and 43 minutes.

“It’s not easy. It’s 1 AM and we are still on court finishing the match. I was fighting hard for this match because when we went off court. I was losing and just said: OK, I am going to try my best because I know Petra is a great player and I have to play on a very high level. I am very glad with how I finished the match. She was hitting very hard from the beginning The first set started good from my side, but she was playing very aggressively and very deep, so for me, it was hard to hit winners off those balls. I was just trying to manage somehow”, said Ostapenko.

Azarenka has extended her win-loss record to 13-5 in her head-to-head matches and 9-4 on hardcourt.

The Belarusian earned an early break and consolidated it to open u a 3-0 lead. She went up a double break to race out to a 5-1 lead. Radwanska pulled one of the two breaks back, but Azarenka broke for the third game to seal the opening set.

“I played my game, and I was doing what was working. I was aggressive, I was using my opportunities to step up and I put pressure. I am pretty happy that I was able to play consistent throughout the whole match”, said Azarenka.

In the first set Kerber came back from an early break down in the fourth game to draw level to 2-2 lead. The German player broke again in the sixth game to build up a 4-2 lead. Wang broke back in the seventh game for 3-4. Kerber saved three break points in a marathon 12th game to break straight back to set up a tie-break. Wang reeled off six consecutive points to wrap up the first set 7-1.

Kerber got the only break in the fourth game of the decider to take a 3-1 lead and closed out the match after 2 hours and 55 minutes after dropping just four points on her serve.

“I think Wang played good, and for me it was not so easy to find my game. I never played against her. I had no idea what to expect. I just knew that she played good here the last few days and also few weeks. It was not so easy, and I was just trying to fight. I think it was the key for me, that I was really fighting for every single ball, also especially in the second set in the tiebreak when it was 5-5”, said Kerber.

Kerber set up a quarter final against Sloane Stephens, who beat Garbine Muguruza.

“For me it will be a challenge. The last time I lost against her. Now I just can try again to go out there, play my best, and try my best to give all I can to win the match”, said Kerber.

Venus Williams gets revenge on Konta