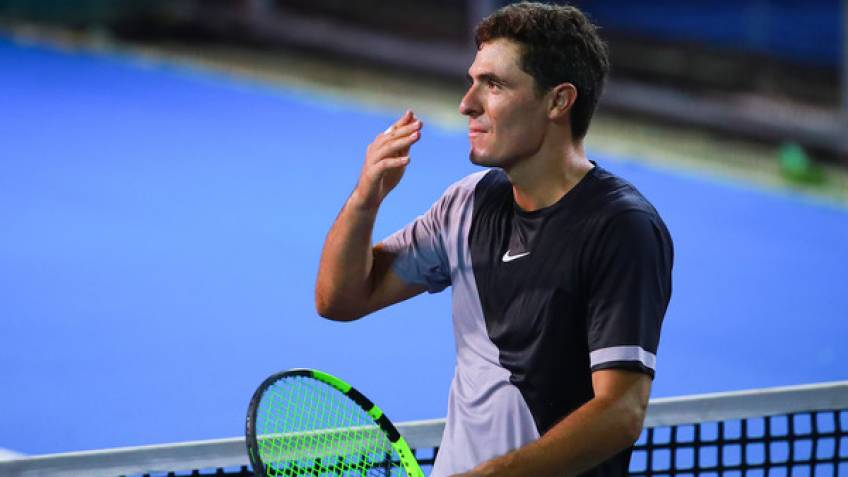 Ernesto Escobedo beat this year’s Delray Beach champion Frances Tiafoe 7-5 6-3 at Indian Wells after 82 minutes in their first head-to-head match on the Tour. Escobedo won 62 % of his service points and broke serve three times to set up a Round of 64 clash against Feliciano Lopez.

Escobedo served at 48 %, but he faced just two break points and dropped serve once. Tiafoe was broken three times.

Gael Monfils beat Matthew Ebden 6-3 6-3 after 71 minutes to score his 12th win of the season. The Frenchman won almost 50% of his return points and converted on four of his six break points. He fended off two of the three reak points.

This year’s Doha champion hit a forehand winner a few minutes later to wrap up the first set.

Ebden broke serve in the second game but Monfils got a double break in the third and fifth games to go up a set and a break. Monfils broke back in the third game after Ebden made a double fault. He broke again in the fifth game with a forehand down the line and closed out the match with another break in the nith game after Ebden made a double fault to secure his spot in the second round, where he will face John Isner.

“The ball was flying quite a lot. It was not easy to adapt but today I was just lucky to get the win and in straight sets is always good. I will be focused for the next one”, said Monfils.

Marcos Baghdatis rallied from 2-4 down in the third set to beat Yoshihito Nishioka 7-5 3-6 7-5 setting up a Round of 64 match against Diego Schwartzman. Joao Sousa fought back from a set and a break down to battle past Mikhail Youzhny 4-6 6-4 7-6 (7-5) after two hours and 39 minutes.

Andy Murray Skips French Open To Focus On The Grass

The decision has been made after the Brit experienced some ‘discomfort’ during his time in Rome.

Three-time Grand Slam champion Andy Murray has delayed his return to competitive tennis after deciding to not play any more tournaments on the clay this year.

The former world No.1 has confirmed that he will not be playing at the French Open, according to multiple British media sources. Murray’s decision comes less than a week after he was in Rome training with some of the Tour’s top players. During one of his practice sessions in the Italian capital, he had a hit with world No.1 Novak Djokovic who said afterwards he was impressed by the current form of the Brit.

“I was very happy to see him. I haven’t seen him in a while, and it was great to hit with him. I thought he played very well on the court,” Djokovic told reporters last week.
“He moves well considering it’s clay which is not the best surface for his hips. But considering what he has been through lately, I think it seems like he’s been feeling well on the court. That’s what he’s saying, and that’s what it appears on the court itself.”

It is understood that Murray experienced some discomfort in Rome where he participated in the doubles tournament with Liam Broady after receiving a last-minute entry. It is unclear as to where the pain is located and how serious it is. Although it has been deemed significant enough for him to decline a wildcard into next week’s Geneva Open and pass on the French Open where he would have possibly had to play in the qualifying draw.

Murray will now switch his focus to the grass ahead of Wimbledon. He is currently scheduled to next play at The Queen’s Club where he has a contract to play there for the rest of his career. The tournament will start on June 14th with Murray saying he is looking forward to playing in front of a British crowd again. Under current restrictions, Queen’s will welcome 25% of its 9000-spectator capacity.

“It’s been such a difficult time for everyone and it will be great to play in front of home fans in Britain again,” said five-time champion Murray. “The tournament at Queen’s has always meant a lot to me – it’s where I won my first ATP match, I’ve won the singles at Queen’s more than any other in my career, and I’ll never forget our doubles title in 2019. I can’t wait to get back out there.”

34-year-old Murray has played just 11 Tour matches since winning the European Open in Antwerp back in 2019. He is currently ranked 123rd in the world.

Novak Djokovic survived a brutal test from Stefanos Tsitsipas to reach the semi-finals in Rome. 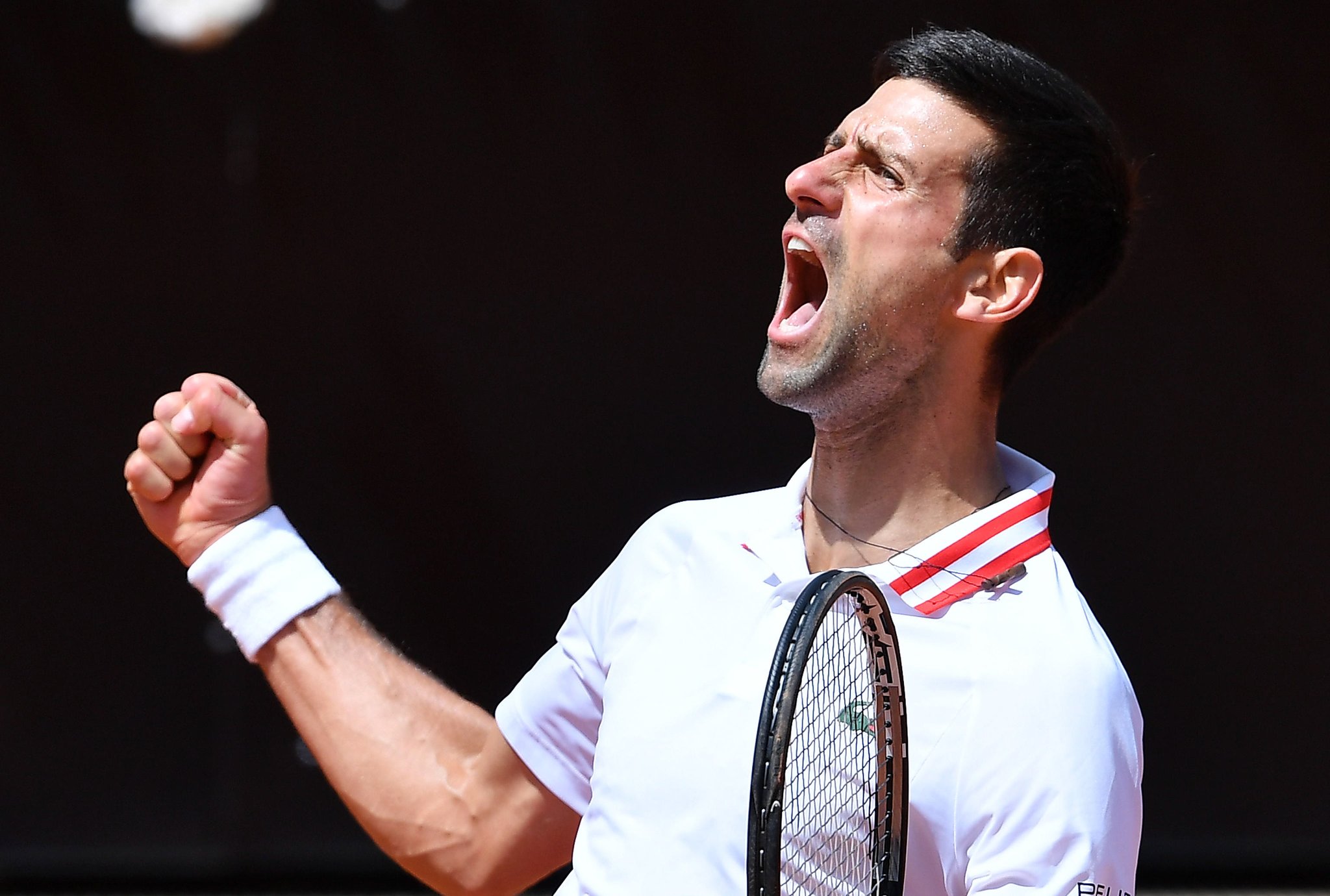 Novak Djokovic survived Stefanos Tsitsipas over two days as a 4-6 7-5 7-5 win ensured his place in the last four of Rome.

The world number one came back from a set and a break down to ensure his place in the semi-finals in Rome.

It’s the second time in the space of a few weeks that Tsitsipas has lost to Djokovic and Nadal in three hour epic matches.

Next for Djokovic will be Lorenzo Sonego who beat Andrey Rublev 3-6 6-4 6-3 in his delayed quarter-final.

It was a bright start from Tsitsipas who was aggressive from the first ball and took the match to the world number one.

An early break helped settle the Greek down who was producing tennis of the highest from the baseline and at the net as he rushed Djokovic into errors.

That became a double break as the Serb was distracted by the rainy conditions as he couldn’t hit through Tsitsipas’s consistent defence.

After breaking back and consolidating after some nice combinational patterns of play, rain halted play for a few hours.

Once they came back it was Tsitsipas who continued to dictate the points to his favour and with accurate serving was able to close out the first set in in 51 minutes.

The start of the second set was no different, after both players held serve to love Tsitsipas grinded out a crucial break taking advantage of a lack of concentration from Djokovic.

However once again rain halted play and Djokovic had a whole night to figure out how to turn the match around as play was abandoned for the day.

As play resumed the next morning, Tsitsipas continued where he left off from yesterday as he was the aggressor dictating points and putting Djokovic under pressure.

That was until the eighth game as Djokovic raised his level and managed to make a lot of deep returns to cause Tsitsipas trouble.

Tsitsipas managed to save four break points with some clutch tactical serving and bold high-margin play.

On the fifth break point Djokovic finally punched a hole through Tsitsipas’ defence to level the set at 4-4 as he let out a huge roar.

The Greek remained valiant and produced a higher level of base play throughout the rest of the set as he earned two opportunities to break back.

However this time it was Djokovic’s turn to produce clutch serves and unlike Tsitsipas, the Serb held for 5-4.

Big moments were meant for big players and you can always rely on the world number one to produce those. A big final return game from Djokovic sealed with clever tactical played allowed him to break and let out another huge roar as he levelled this match at one set all.

In the final set, there was ball-striking of the highest quality as both players looked to out manoeuvre and out-hit each other.

The first break of the set went to Tsitsipas as Djokovic’s shot failed to reach the other side of the net as the Serb smashed his racket into the side barrier of the court.

After holding for a 3-1 lead, Tsitsipas looked to finish the match out as he had four opportunities for a double break lead.

A combination of erratic decisions and clutch serving from the world number one saw them saved as the Serb would hold on.

In typical Djokovic fashion he would break in the next game comfortably as this was turning out to be one of the best final sets of the season.

Tsitsipas would have the chance to close out the match after breaking for a 5-4 lead but the Serb’s court coverage was too good and he continued to hit insane returns for 5-5.

After 3 hours and 15 minutes of play over two days, Djokovic produced a near-perfect final game to deny Tsitsipas the win as he made his way into the semi-finals.

Next for the world number one will be Lorenzo Sonego on Saturday evening for a place in the final.