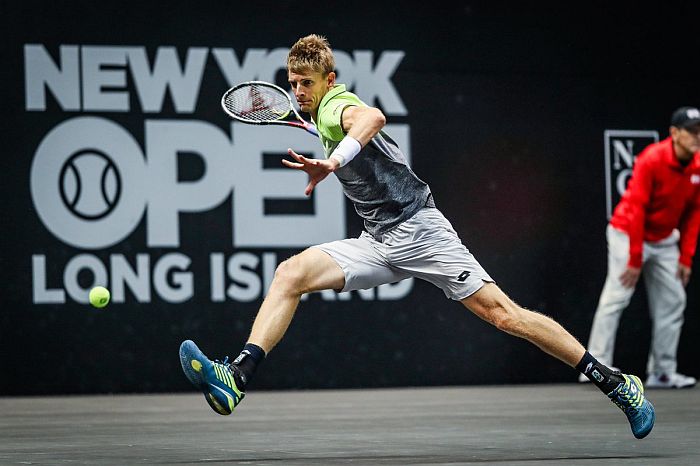 The 31-year-old was pushed to his limits during a roller coaster final against Sam Querrey. The hot and cold match saw Anderson produced some of his best and worst tennis as he fired 16 aces. Sealing the title 4-6, 6-3, 7-6(1) after more than two hours of play.

“Tennis is a tough sport. You can play a lot of tennis, lot of matches and if you don’t win that final match, it can be a pretty tough week,” said Anderson. “One of my goals this year was to be more successful in the final stage. I fell a little short in India earlier this year. It feels great to come through. Gives me a lot of confidence for the year.”

Anderson’s journey to his fourth title has been far from straightforward. In every round of the tournament he has been forced to play three sets. In his latest clash against Querrey, a tentative start to the match saw the South African struggled to maintain consistency in his serve. Nevertheless, he managed to turn his fortunes around with some inspired play by racing to a 5-1 lead in the second set before dominating the tiebreaker in the decider.

“I think I can take a lot of confidence in the way I was able to come through those close matches. I was tested, every single match went to three sets, three of the four matches went to 7-6 in the third and I played some of my best tennis when it mattered.” He evaluated about his performance at the tournament.
“I think if you can come through those matches, you can really take a lot of confidence. My body responded well, that is always a big positive.”

Guided by American coach Brad Stine, Anderson has climbed up the rankings to a career high of ninth in the world. He is the only player from his country ranked inside the top 200 on the ATP Emirates rankings. Last year he became the first South African player to crack the top 10 since Wayne Ferreira in 1992, staying in the elite group for just one week.

Despite his latest achievement, the new world No.9 is hungry for more success with his focus being on qualifying for the prestigious ATP Finals in November. Only the eight highest ranked players will qualify to play at the event in London.

“To be honest with you I have set my sights for a little bit higher as well, you know, finishing the year, making London is one of my biggest goals that I have.” He told reporters in New York.
“Anytime that you reach career milestones, it feels great, so I definitely can enjoy that for now before I have to reset and step onto a court again, but winning a tournament and [getting] a career-high ranking at the same time, that definitely feels good.”

Anderson is now heading to Florida where he will play at the Delray Beach Open. He will be seeded third in the tournament.