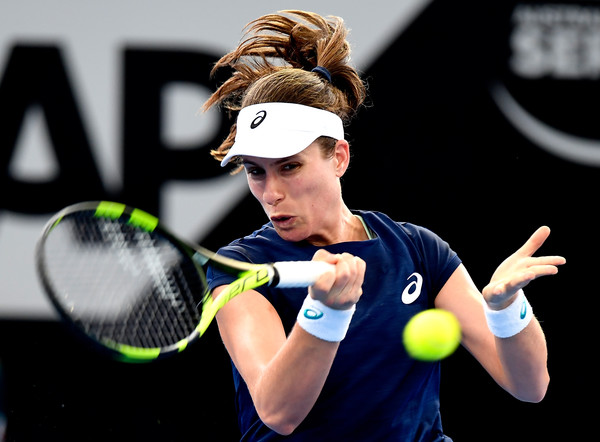 British No.1 Johanna will play three WTA Tournaments on the grass prior to the start of the Wimbledon championships.

The world No.11 has started her intention to play at the Nottingham Open, Birmingham Classic, and Eastbourne International. Three tournaments that will take place during June ahead of the Wimbledon championships. It will be the fourth season in the row where Konta has played at the trio of tournaments. Last year she reached the final in Nottingham and the semifinals in Eastbourne.

“I’m so excited to be returning to play these fantastic tournaments in the summer.” Konta said in a statement.
“The grass court season is one of my favourites and nothing compares to competing at home with passionate fans, friends and family who are behind you all the way. I know I’m incredibly lucky to have the opportunity to compete in front of a home crowd and especially in Eastbourne where my family home is just a stone’s throw away from Devonshire Park, it’s such a special feeling.”

The 26-year-old will be hoping the tournaments will put her on course for another successful run at Wimbledon. Last year she became the first British woman to reach the semi finals since Virginia Wade in 1978. Her quarter-final win over Simona Halep set a new British ratings record for a women’s Wimbledon match. A peak of 7.4 million viewers tuned in to watch her triumph in three sets on the BBC.

“These tournaments also provide me with the perfect pathway to Wimbledon. Last year it proved to be the best preparation possible as I enjoyed my most successful Wimbledon ever, and hopefully it will have the same effect for 2018.” She said.

Konta has enjoyed a mixed start to her season. At the Brisbane International she reached the quarter-finals before retiring due to a hip problem. Since then, she has suffered a first round loss in Sydney followed by a second round exit at the Australian Open.

This year the British No.1 will be bidding to win her first ever title on the grass.