Jared Donaldson One of the Good Guys - UBITENNIS 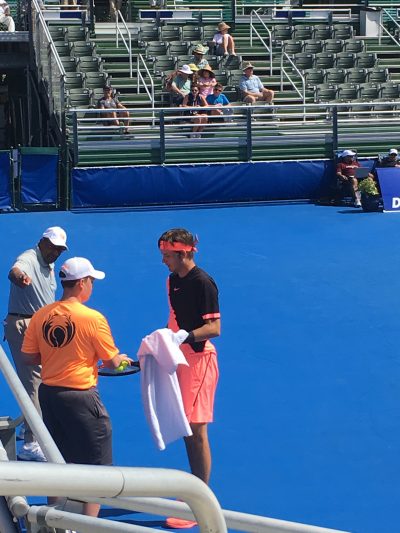 Jared Donaldson may have been the loser in his 2nd Round match at the Delray Beach Open in Florida on Thursday afternoon but one observation on this day made him a winner.

Like all players, Donaldson gets a ball or two from one of the ball boys on the court before he serves. These young kids are also the “go-to” when the players need a towel to dry off their face or arms from the perspiration they endure.

Donaldson, each time he received a ball could be heard quietly saying “thanks” to the ball boy. Two balls, two “thanks”, three balls, three “thanks”. On top of that every request for his towel started with a “towel please” followed with a “thanks” when he received it.

Subtle gestures which you rarely see from most players on the tour even once or twice during a match.

“I think saying something like that gets their attention easier. It shows valuing their contribution to the match, I mean it’s tough, it’s hot out there so I think it’s a nice way to get their attention”

The USTA had this response to a tweet about Donaldson’s on court behaviour on Thursday “Jared Donaldson has always been a class act, on and off the court!”

Related Topics:Jared Donaldson
Up Next