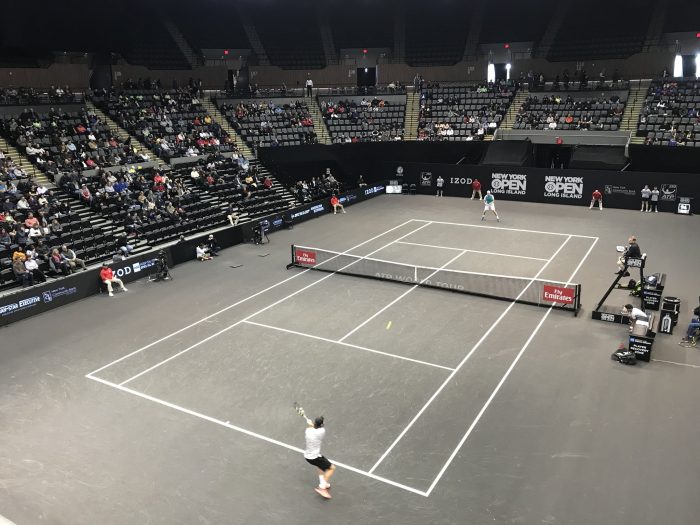 The tournament director of the New York Open has hit back at Adrian Mannarino following recent comments he made about the event.

Mannarino, who lost in the semifinals, made fun of about the location of the inaugural tournament. It is held at the Nassau Veterans Memorial Coliseum. A multi-purpose indoor arena located in Uniondale, more than 20 miles away from Times Square.

“Happy my girlfriend was here, otherwise I would have killed myself,” Mannarino joked last week. “Being in the middle of nowhere, not doing anything during the day, only playing tennis, is not the thing I really like.”

The comments from the world No.24 has been blasted by Josh Ripple, the chief official of the tournament. Ripple is an American businessman and former coach that was a key driving force behind moving the ATP 250 event from Memphis to New York.

“The Mannarino comments were not appreciated,” The New York Times reported him as saying. “I think those were the product of sour grapes. If he doesn’t want to come back, he doesn’t have to. Everyone else seemed to think it was great.”

Supporting Ripple, prestigious coach Nick Bollettieri has hailed the event a success. The 86-year-old is regarded as one of the most respected figures in the world of tennis. During his career, he has collaborated with players such as Maria Sharapova, Jelena Jankovic, Andre Agassi, Kei Nishikori and the Williams sisters.

“The venue here is fantastic and in the next year or two it should be a very successful tournament,” Bollettieri recently told reporters.
“Next year I’m planning to come back and invite all the high schools and the junior high schools, coaches and their students to come.”

Unlike other events, the New York Open was conducted on a series of black courts. A move used to make the tournament stand out compared to others. Unusually indoor tennis tournaments are played on green or blue courts. This year’s final saw Kevin Anderson defeat Sam Querrey in three sets.

Five Players To Watch On The ATP World Tour This Week