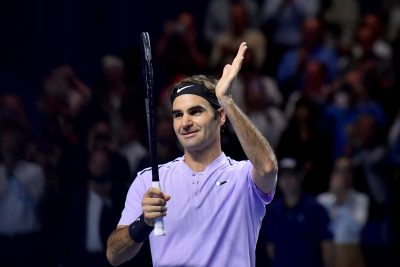 According to Stich, who is an ex-Wimbledon champion and a former French Open and US Open runner-up, the current crop of players does not take enough risks to challenge the Swiss superstar when they square-off against him on the men’s circuit.

Federer has lost only five matches since making his comeback from a six-month injury layoff at the beginning of 2017. His stellar run has left him only 155 points behind arch-rival Rafael Nadal, in the race to No.1 in the world rankings. The 36-year-old will dislodge the Spaniard from the summit of the rankings by reaching the semifinals of the ABN AMRO World Tennis Championships in Rotterdam this week.

“We’ve seen odd matches like (Sergiy) Stakhovsky beating Federer one year (at Wimbledon in 2013), where the guy’s played serve-volley all the time and kept putting pressure and pressure all the time,” Stich said on Beyond the Baseline Podcast.

“I have not seen any of the top guys these days hitting passing shots over five sets. I think they won’t. I have a philosophy.

“If I lose the first set let’s say 6-2, and I see that my tactics don’t work, well I try something different.

“So I might as well try something and give myself the chance to come out as a winner.

“When players came off court losing against Roger and saying ‘it was a pleasure to lose against Roger Federer’, that’s where I feel like, wow, please.

“That’s not the competition you want to have on the tennis court. No matter how good the guy is, just take some risks.

“Try to get away from your comfort zone and try something out. If you lose, well, make it better the next time.”