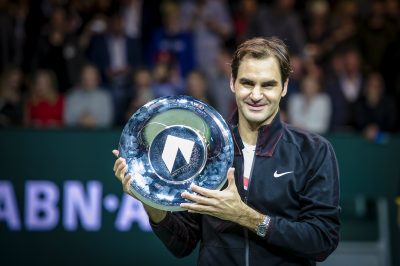 Edberg, a former No. 1, who coached Federer from 2013 to 2015, was in conversation with Indian media outlet Firstpost. According to Edberg, the biggest contributor to the 36-year-old Federer’s dominance is his willingness to improve his game even in his mid-thirties.

Edberg said: “Yeah, I think we all are astonished over his success, especially over the last year. Who would have thought of winning three Grand Slams within one year at this stage of his career? I think it’s almost like a dream come true in many ways. Very unexpected for myself. I thought when we started working many years ago, I thought, yeah I think he still can probably win another Grand Slam, or maybe two with a little bit of luck.”

“But then obviously, he was out with injury for six months and Rafael Nadal was out for five-six months. There were a lot of doubts, are they going to get back? And suddenly, last year at the Australian Open, they end up playing each other in the final. And what a great match it was. And what excitement, and obviously I was really happy to see Roger come out as a winner there. I know it meant so much to him.”

“Maybe this break, he came back with a little different mind, not many expectations, and obviously with an improved backhand. I think the backhand shot, the way he is hitting the backhand today — that’s really made a difference.”

Edberg reckoned because Federer took extra care of his body, avoiding multiple injuries like his main rivals, Rafael Nadal, Novak Djokovic, Andy Murray and Stan Wawrinka, it helped Federer to make a strong comeback after spending six-months out of the game in 2016.

Edberg added: “I think he is probably very sensible about taking care of injuries, and taking the time to get your body right. I think he has probably done that throughout his career. But still, it’s exceptional to play at this level at this late stage of his career.”

“The great thing with Roger is he always wants to improve, he wants to improve his game. But what’s even more impressive is that he still has the motivation and wanting to be out there and to play. And to play at this level is extraordinary.”

“It’s great for the game that he is still out there, and is still winning and is still on the tour because I think he, with some of the other players of this sort of golden era, taking into account Rafael Nadal, Novak Djokovic and maybe Andy Murray, Stan Wawrinka — those are the guys that have won most of the Grand Slams over the last decade. And they are still winning. But I am sure there are going to be some changes in the future. You have the new generation coming into play slowly.”