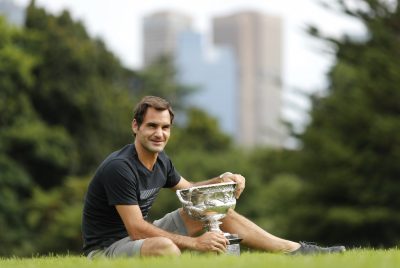 Former World No. 1 Stefan Edberg, ex-coach of reigning Australian Open champion Roger Federer, has come up with a huge theory about the Swiss star’s recent success.

According to Edberg, Federer, who won his 20th Grand Slam title at the Australian Open in Melbourne last month, has been helped by his four children in his pursuit of excellence. The Swedish legend insisted Federer’s two sets of twins have helped him remain young and prolonged his career.

The pundits had written off Federer after the Basel native started to struggle after Rafael Nadal and Novak Djokovic’s dominance reached its zenith in 2013. Federer has failed to win a Grand Slam trophy for the first since 2003 that year and then couldn’t win a Major title until the 2017 Australian Open, where he defeated Nadal in a five-set epic to claim his 18th Slam crown.

His fairytale didn’t stop after winning his fifth title in Victoria as he went on to secure a record 8th Wimbledon crown in London. The 36-year-old opened his 2018 campaign in perfect fashion by defending his Aussie Open crown at Melbourne Park.

And Edberg believes Roger’s family has contributed immensely to his success. His family has supported his decisions and that has made Federer stronger and tougher.

“Maybe his four children keep him so young. But what’s possible for him doesn’t count for others,” Edberg told Express Sport.

“Is he a better player than what he was a decade ago? It’s tough to say.

“You normally play your best tennis from 22 to 28.

“He may have dominated the Tour the most at that age, but look at last year.

“In some ways, he is a better player than 10 years ago, although he is not that fast.”

“Roger is unique in many aspects,” Edberg added.

”He still loves the game, is improving, has a big motivation, and is fit, which is something great considering his age.

“We all know that he plays tennis beautifully and that he is the best ambassador for this sport.

“He has a good relationship with the press and treats sponsors, fans in a unique way.

“He is perfect. It will be very difficult to replace him. He can’t be copied.”