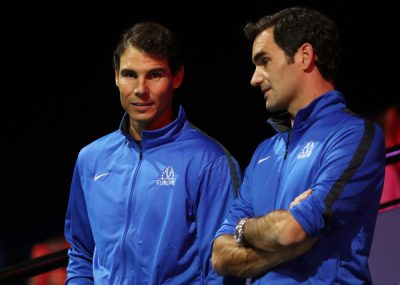 Former Wimbledon finalist Tomas Berdych has claimed that 19-time Grand Slam champion Roger Federer and World No. 1 Rafael Nadal have spoiled fans with their success over the years.

Berdych, a former World No. 4 was emphasizing on the fact that since the start of 2004, Federer, Nadal, Novak Djokovic, Andy Murray and Stan Wawrinka have won 52 Majors out of a total of 56 with only four other players winning Grand Slams during that period.

While the Czech isn’t amused by their success because of their special talent, Berdych does believe the fans will continue to support the Big Five.

However, all five of them are at a different stage in their respective careers. Federer is competing at the Hopman Cup in Perth and is the overwhelming favorite to win the upcoming Australian Open. On the other hand, Djokovic, Nadal and Wawrinka will assess their fitness levels in exhibition events in Melbourne next week, while Murray has already withdrawn from the opening Grand Slam of the year.

“It’s absolutely normal that they are going to be era,” Berdych said.

“And I think still they were pretty long time. So it was very exceptional.

“I think just people maybe get too spoiled of that, that they are going to say always Roger, Rafa, Andy, and we cannot forget Stan won also three Slams.

“The guys have had great results and been consistent for so many years.

“I think I can count myself also to one of them there. But that’s how it is.

“I think it would be very sad if we would be dominating for the whole time and there will be no other young guys coming up.

“I think we just get to the stage where they reach a pretty high level which they are going to be definitely competitive to get a chance to win a Slam.

“And I think it’s going to be a very interesting year ahead of us.”