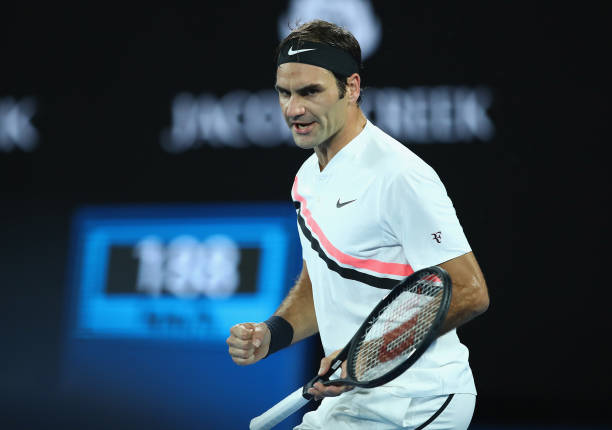 Defending Australian Open champion Roger Federer recorded his 17th victory over 29th seed Richard Gasquet in 19 meetings to reach the fourth round of the Australian Open for the 16th time in his career.

The second seed was in imperious form playing once again inside the Rod Laver Arena in the night session. Despite a slight wobble in the third set, Gasquet played a good match against the former world number one but was no match for the defending champion.

Both players demonstrated their backhands to the delight of the crowd on the Rod Laver Arena with the two seeded players holding onto their opening service games to love but it was the defending champion who drew first blood by breaking the veteran Frenchman’s serve to lead 3-1 with a scorching forehand return winner down the line.

However, it was lights out tennis for the 19-time Grand Slam champion as he took the opening set in just 27 minutes on the clock, 6-2 virtue of an untimely double fault from Gasquet.

The second set was slightly more competitive as the former world number seven tried to be more aggressive, and it paid off but Federer’s blistering backhands and his movement around the court was scintallating.

Federer brought up his second set point by producing a crushing backhand passing winner, which Gasquet could do nothing about it. The reigning champion gained a two sets to love lead with one hour and 12 minutes played on the clock, avoiding a second set tiebreak.

The third set was seemingly going to be a rout for the second seed as Federer quickly raced out to a 3-0 lead, and the former world number one had the chance to go 5-2 up, and serve for the match but there were signs of complacency from Federer as the 29th seed hung on, and finally broke the Swiss’ serve.

Nevertheless, the defending champion regrouped when he needed to, and saw off Gasquet in just under two hours to continue his title defence into the second week, where he will face Hungary’s Marton Fucsovics for a place in the quarterfinals on Monday.

After the match, Federer spoke to two-time Australian Open winner Jim Courier, who was conducting the off-court interview, where the defending champion entertained the crowd with his humorous answers.

“Exactly, my head’s still spinning from that match point where I got so lucky and I’m just trying to get over that one, I was more offensive with my backhand than he was, I protected my serve a little bit better than him.

“The second set was tight, the match was close, the end could have gone to a tiebreaker you never know, to focus for till the very end is a terrible answer, Richard played well, me too and I’m happy to get the win tonight.”

“I know Marton a little bit, he came to Switzerland last year, time flies, I’m not sure, he came to train with me for a weekend, super nice guy, hardworking and I’m really happy for him, these guys work as hard as we do, they never get to see (the) Rod Laver Arena sometimes, he’s a great baseliner and happy that I know him a little bit.”