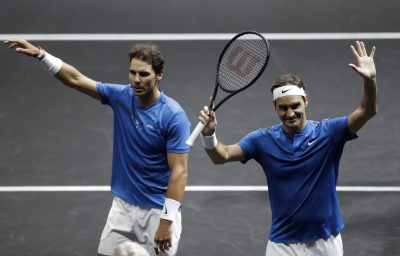 Former World No. 1 Mats Wilander has warned 16-time Grand Slam champion Rafael Nadal against allowing Swiss superstar Roger Federer to play the game at an extremely high pace if he is to overturn his recent losing streak against him.

Until last year Federer struggled to find a way to dominate his arch-rival Nadal with the Spaniard employing his well-tested strategy of pinning the 36-year-old into the corners with the help of his topspin forehands. However, with coach Ivan Ljubicic’s assistance Federer found a tactic to overcome that play and since then has reigned supreme in his matches against the Majorcan.

And Wilander, a seven-time Major winner, thinks he has found the secret behind Federer’s recent success against Nadal.

“That’s why he is rushing so much. That’s part of his tactics and I think it’s working.

“The last few times, Nadal was making too many mistakes trying to keep up with the pace of Roger Federer and I don’t think he can do that.

“Nadal has to say ‘if you can beat me, beat me but I am not going to beat myself by trying to hit winners’. That’s the only chance he has.

“He has a good chance if he does that and starts playing a little more like he used to, he has really good chance of wearing Roger Federer down mentally and physically.”

“Nadal needs to have patience because when Federer is playing well like he did last year, I don’t know if anyone in the world is able to beat him,” Wilander added.

“[But] it’s not going to last forever.

“I also think that Nadal has to be careful that he doesn’t fall into the trap where Federer tries to play such quick points and so quick in-between points that I think Nadal gets caught up in the tactics of not wanting Federer to control everything. Therefore, Nadal plays more aggressive. The more aggressive Nadal plays, the shorter the points, the better that is for Federer.

“I think Nadal has to take a step back and say to himself: ‘I am playing against the greatest player of all-time. I have to have enough respect and discipline to admit that Federer at his best is better than me and I just have to somehow make the points last longer so that I can make him tired. I cannot afford to make mistakes.’”

Why players fear Roger Federer more than ever before