Dominic Thiem through to fourth round of Australian Open - UBITENNIS 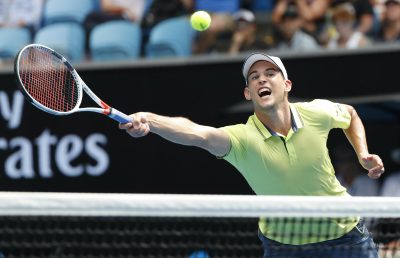 World No. 5 Dominic Thiem is through to the fourth round of the Australian Open after defeating Adrian Mannarino 6-4, 6-2, 7-5 on Saturday.

Thiem, the fifth seed, looked in total control of the contest from the outset, not giving the Frenchman any sort of opening to put him under pressure on Margaret Court Arena. Maintaining his perfect winning record against Mannarino, Thiem improved his record against him to a dominant 7-0.

The 24-year-old Austrian, who survived a five-set epic against American qualifier Denis Kudla in the previous round, didn’t look tired and played with a lot of energy and freedom, moving his challenger from one side to the other of the court quite beautifully. Thiem’s ability to change the direction and the pace of the ball nearly at will won him a lot of points.

There was a stark difference between the two players in almost every department in the opening set. While Thiem broke Mannarino’s serve twice, Mannarino accomplished just the solitary break. Moreover, Thiem’s 12 winners in comparison to Mannarino’s 2 were a clear signal towards the French Open semifinalist’s aggressive style of play.

The second set was even more lopsided as Thiem bagged it without wasting too much time with the help of two breaks of serve. However, the third set, which proved to be the final set of the match was highly competitive. With both players exchanging breaks of serves, the pendulum of set No. 3 kept on swinging back and forth before Thiem made his move at the business end of the clash. In the end, he came out as the well-deserved winner in two hours and eight minutes.

“I want to go further than round four and I’ll give everything to do it for the first time,” he said in his on-court interview.

Thiem will next play the winner of the match between Germany’s Maximilian Matererer or Tennys Sandgren of the United States for a place in the quarterfinals.

World No. 4 Alexander Zverev crashes out of Australian Open