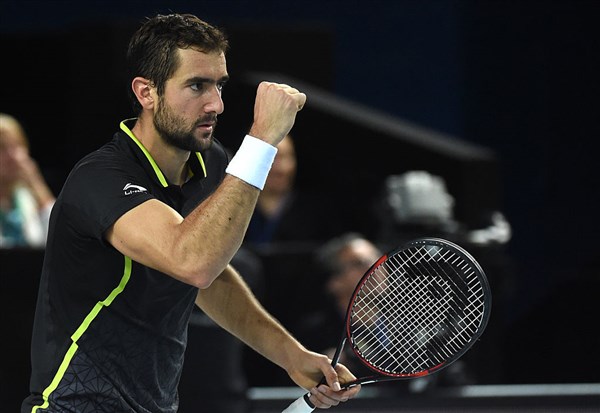 After experiencing one of his most successful season’s on the tour in his career, Marin Cilic is eager to scale new heights in 2018.

The former US Open champion started and finished 2017 inside the world’s top 10 for the first time. Consistency has aided the Croat to achieve the accolade. Playing a total of 23 tournaments this year, Cilic has managed to reach the quarterfinals or better at 13 of those. At the Wimbledon championships, he reached his second grand slam final before losing to Roger Federer. Overall he has played in three ATP finals this year, winning his sole title at the Istanbul Open.

“My goal was to finish the year at the Masters (ATP Finals) in London and try to get in the top 5 in the world. I managed to achieve both goals, but due to a couple of defeats I dropped out of the fifth place.” Cilic told reporters in Croatia earlier this week.
“This was the first season I started and finished as a Top 10 player, which is a great success for me.”

Relishing in his success, Cilic is eager to keep the ball rolling. Peaking at ranking high of 4th in October, the 29-year-old has set out an ambitious goal of breaking into the top 3 next year. It will be a far from simple task given the return of some big names that has been absent from the tour. Novak Djokovic, Andy Murray, Stan Wawrinka and Kei Nishikori have all been nursing injuries in recent months.

The prospect of Djokovic and Co returning isn’t one that intimidates Cilic. Ironically, it is having the opposite impact.

“I hope to go up the ranks next season, come into the Top 3. From year to year I have moved the boundary, I believe that competition will be much heavier. Murray, Djokovic and Wawrinka coming back, will be interesting, much harder, but that’s more motivation (for me).” He said.

The departure of Bjorkman

One person credited for aiding Cilic’s stellar year is Jonas Bjorkman. The world No.4 began working with the Croat in August 2016, guiding him to a three titles on the tour. Earlier this year, Cilic described the Swede as ‘hard working with a nice personality’ that suits him.

Due to the mutual respect between the two, it came as a shock when they announced their separation at the start of this month. Speaking about Bjorkman’s departure, Cilic said that it was because he was unable to commit himself full-time.

“I was very happy, we did a lot of good things, but looking forward, I have to move forward. The reasons for the break-up are obligations.” The 29-year-old explained.

For the foreseeable future, the man guiding Cilic will be Ivan Cinkus. Who has been a member of the team for three years, previously working as an assistant coach. No names have been mentioned about a potential replacement for Bjorkman, but Cilic is hoping to enlist the support of another super coach. Emulating players such as Djokovic, who is coached by Andre Agassi and Radek Stepanek.

Cilic will return to action in the first week of January at the Maharashtra Open in India. He is set to be the top seed in the tournament.

Related Topics:Marin Cilic
Up Next