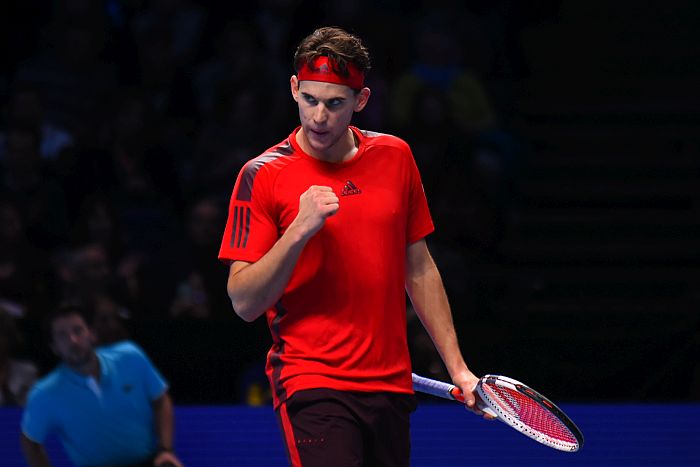 Dominic Thiem announced his full schedule for the 2018 season, which is going to be another very busy year with 13 tournaments from the end of December to the end of May. The Austrian star will start the new season at the Mubadala World Tennis Championships in Abu Dhabi, where he will take on this year’s ATP Next Gen Final runner-up Andrey Rublev.

Thiem will play in his first ATP tournament in 2018 in Doha before playing in the exhibition tournament in the Kooyong exhibition in the build-up to the Australian Open, where he lost to David Goffin in the fourth round last January.

After Melbourne he will have a busy South American clay season with two touranemnts in Buenos Aires and Rio De Janeiro. He will have to defend the title won in the 2017 Rio de Janeiro final against Pablo Carreno Busta, after a successful tournament in which he did not drop a set. He lifted the 8th title of his career in the Brazilian city, the sixth on his favourite clay surface and his second at ATP 500 level.

He will then move to Mexico to play in Acapulco on hard-court, where he won the title in 2016. Last March Thiem lost against eventual champion Sam Querrey in the quarter final.

In March Thiem will play both US hard-court Masters 1000 tournaments in Indian Wells and Miami. This year the Austrian player lost the tie-break in the third set against eventual finalist Stan Wawrinka in the quarter finals at Indian Wells. He then lost in his opening round match against Borna Coric in Miami.

Thiem will open his European clay season in Monte-Carlo, where he lost to David Goffin in the second round. He will have to defend a lot of points in the two Spanish clay tournaments in Barcelona and Madrid, where he finished runner-up to Rafael Nadal last April. The Barcelona organizers has recently announced that Rafael Nadal and Grigor Dimitrov will also play in the Catalan city. Last April Thiem scored his first win against a world number 1 player beating Andy Murray in three sets in the semifinals. In Madrid Thiem beat Grigor Dimitrov in a very tight third-set tie-break, Borna Coric and Pablo Cuevas to reach his first Masters 1000 final where he lost in his second consecutive title match on clay against Nadal.

He will start his grass season in Halle Gerry Weber Open, where he reached the semifinals in 2016 losing to eventual champion Florian Mayer. At Wimbledon he will try to improve the fourth round achieved in 2017, when he lost to eventual semifinalist Tomas Berdych.

The player coached by Gunther Bresnik will return to European clay at the end of July to play in Kitzbuhel in front of his home fans. This year Thiem skipped the Austrian tournament, as he chose Washington on US hard-court. Thiem achieved his best result in Kitzbuhel in 2014 losing to David Goffin in the final.

“I am looking forward to Kitzbuhel. Last year I made the decision with a heavy heart that I would like to try something different and change to hard court, which did not work out that well. Kitbuhel is one my favourite tournaments. I am especially looking forward to the atmosphere with a packed centre court. In the last few years, that has always been the case. I will give my best to eventually take the title here”, said Thiem.

Thiem will play a full US hard-court season with Toronto, Cincinnati and the US Open. This year he reached the quarter final in Cincinnati and made it to the fourth round at Flushing Meadows before losing to Juan Martin Del Potro in five sets in one of the best matches of the tournament after failing to convert two match points in the fourth set.

After the US Open he will play in either Tokyo or Beijing, Vienna, Paris Bercy with the goal to qualify for the ATP Finals in London. During the 2017 autumn season he lost three straight matches in Chengdu, Tokyo and Shanghai against Guido Pella, Steve Johnson and Viktor Troicki respectively and lost in his second round match in Vienna and Paris Bercy against Richard Gasquet and Fernando Verdasco and will not have a lot of points to defend in this period of the year.

Thiem broke into the top five for the first time of his career and rose to world number 4 reaching a career high on 6th November 2017.

Federer and Nadal are the greatest athletes of all time: Tim Henman