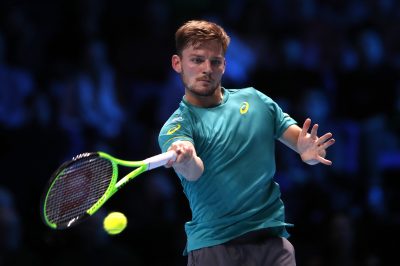 Fourth seed Dominic Thiem will battle World No. 8 David Goffin in a winner-takes-all encounter at the ATP World Finals in London on Friday. Whom do you think will secure the right to meet Roger Federer for a place in Sunday’s showpiece final – Thiem or Goffin?

World No. 4 Dominic Thiem’s 2017 has followed a similar trajectory to his success story in 2016, when he performed exceedingly well on his favorite surface, clay, and during the initial six months of the year, only to fade away in the next half of the season. Just like 2016, his first half has been extremely good with the clay courts of both South America and Europe turning out to be happy hunting grounds for the Austrian.

His rise to No. 4 in the world was made possible by a string of deep runs in multiple tournaments, highlighted by his title triumph in Rio, appearances in the finals of Barcelona and Madrid and by reaching the semis of the Rome Masters and Roland Garros. The losses he experienced in those competitions came at the hands of two of the biggest names the sport has seen in recent times. While he was beaten by Rafael Nadal in Barcelona, Madrid and at the French Open, Novak Djokovic got the better of him in the Italian capital.

Over the years, Thiem’s biggest problem has been over-scheduling and once again it has been the biggest reason behind his current troubles on the tour. Thiem hasn’t advanced through to the last 4 of an event since the French Open and if he does succeed in overcoming the challenge of Goffin in London, he will put his career back on track.

Goffin must be feeling a little frustrated at the moment as despite his first ever victory over reigning US Open winner Nadal which took a heavy toll on him both physically and psychologically, he will have to outclass Thiem to seal his place in the semifinals of the ATP Finals as a loss would bring an end to his season.

The win over the World No. 1 was so taxing on Goffin’s body that he barely managed to move around on the court in his 2nd match against Dimitrov, completely beaten 6-0, 6-2 by the two-time Major semi-finalist. Once again, he will be in a real dilemma whether to push himself physically in his match against Thiem as he will be the main man for Belgium in the Davis Cup Final against France next weekend.

Head-to-head: Goffin has a 7-3 advantage over Thiem including a 4-1 edge on hard courts. Two of Thiem’s three victories over Goffin have come on clay and his only hard court triumph came in Marseille in 2015 when the Belgian had to retire midway due to an injury. It is hardly a secret that Thiem feels extremely comfortable on the red dirt and tends to struggle on hard courts. On the contrary, Goffin has performed really well both on hard courts and clay and will have a slight advantage over Thiem for the very same reason even in this match.