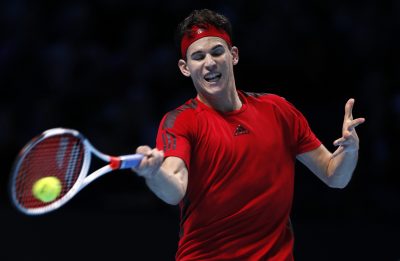 An out of form Dominic Thiem will square-off against London alternate Pablo Carreno Busta at the ATP World Tour Finals on Wednesday night. As the two men search for their maiden win in the tournament – Who do you think will come out as the winner? Will it be the more talented Thiem or will it be the more consistent and determined Carreno Busta?

World No. 4 Thiem has struggled for form in recent times, more so since the US Open, barely managing to win three consecutive matches. In fact, his defeat at the hands of two-time Grand Slam semifinalist Grigor Dimitrov in his opening match at the O2 Arena was his sixth loss in eight matches. It was also the 13th time when the Austrian, failed to beat a top-10 player in 14 career matches on hard courts.

However, he would have still gained some confidence despite coming out as the second best player in the contest as he stayed toe-to toe with the Bulgarian in the match and if it wasn’t for the mistakes he committed at crucial junctures, Dimitrov would have found extremely difficult to escape through to a 6-3, 5-7, 7-5 win. But, he will have to deal with some extra bit of pressure as he will be the favorite heading into the duel and will be expected to deliver the goods against an opponent who doesn’t stand anywhere near him as far as raw firepower is concerned.

For Carreno Busta the year 2017 has been more about luck rather than capability as he is a top-10 player at the moment just because he was the main beneficiary of a series of particularly weaker draws at showpiece events – the primary reason was his success in accumulating adequate points to break into the game’s special club and book his spot in London.

He is definitely there in the British capital because of his good fortune as World No. 1 Rafael Nadal pulled out of the competition citing a persistent right knee injury after losing his opening encounter to David Goffin. Whatever may have been the circumstances, the Spaniard must be lauded for the manner he has handled such situations and has succeeded in outsmarting weak opposition – a good case in point could be his run through to the US Open last 4 where he became the first man to reach a Major semifinal after beating four qualifiers.

Head-to-head: Thiem has won all four of his previous ATP clashes with Carreno Busta, including the Rio Open final on clay in 2017 and their only hard court encounter in New York in 2016. Considering the dominance Thiem has had over Pablo, the pundits are once again expecting a similar result from him and he also knows that if losses this match, then he will have to pack his bags to take a flight back home.

Dimitrov and Goffin contest for spot in ATP Finals semis