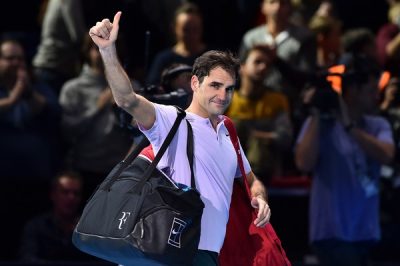 Marc Rosset believes that Roger Federer was ‘mentally tired’ as he failed to win the ATP World Tour Finals in London. Rosset also heavily criticised Dominic Thiem and Marin Cilic for their performances in the season finale.

The 1992 champion spoke about his fellow countryman’s achievements over the past 12 months and accused his failure in London over tiredness, ‘I think Roger came to this masters mentally tired. With him we can’t just talk about the season we have to discuss his progress from Wimbledon in 2016, when he was injured.’ Said Rosset, who spoke to Swiss website, 24Heures.

He continued to praise Federer, who has had an amazing season, ‘Winning two grand slams and three masters events after many operations are not normal emotions. Of course he would like to have won London, however he played Goffin, who had the match of his life. He was simply burnt.’

However the former doubles grand slam champion didn’t quite have the same praise for Dominic Thiem and Marin Cilic, who went out of the ATP Finals at the Round Robin stage. He described the Austrian as a disappointment.

‘Dominic Thiem was a bigger disappointment again. I don’t see any half-improvement in his tennis. Unlike Raonic who improves his return, I don’t think this is a priority on the Austrian. He should be ashamed.’

He also heavily criticised Marin Cilic for his lack of aggression since being with coach Jonas Bjorkman. ‘Cilic is almost like Berdych. He has a break point at 4-4 and he hits backhands in the net. He took a coach like Bjorkman to move his game forward, yet he has been less aggressive since being with him!’

The Swiss also blamed Thiem and Cilic for having ‘no plan B or C’ and he even said that their games tire him and says that they won’t win multiple slams like Andy Murray and Stan Wawrinka.

The ATP World Tour returns in January with ATP Brisbane, Doha and Pune.