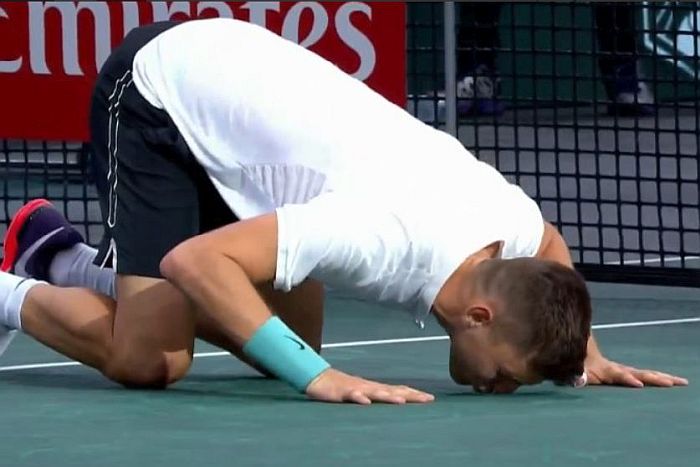 Krajinovic entered the French tournament with just one match win at Masters 1000 level. The number 77 player has become the lowest ranked player to reach a Masters 1000 final World number 191 Andrei Pavel in 2003 and the first qualifier to advance to the final in this category since Jerzy Janowicz in Paris Bercy 2012.

Kraijnovic came into the semifinal after beating Yuichi Sugita, Sam Querrey and Nicolas Mahut and took advantage of a walkover after Rafa Nadal was forced to withdraw from the semifinal due to a knee injury. Isner reached the semifinal after winning three-set matches against Diego Schwartzman, Grigor Dimitrov and Juan Martin Del Potro.

Krajinovic made just four unforced errors in the first set, but he saved three break points and converted his only break point in the fifth game to take a 3-2 lead, as Isner hit a forehand volley into the net. The young Serbian hit consecutive backhand winners down the line to hold at love for 5-3. He held at love for the second consecutive service game to close out the first set, when Isner sent a forehand into the net after 32 minutes.

In a fifth deuce game Krajinovic hit a forehand wide. Isner came through to hold serve with a backhand volley for 3-2. The US player hit an ace to hold, as he was serving at 4-4.

Krajinovic saved a break point in the first game of the third set. He came through a tough five-deuce ninth game to hold serve for 5-4. Isner held serve at 15 to force the decider to the tie-break, where Krajinovic reeled off five of the final six points from 2-4 to take a 7-5 win.

Isner got a mini-break on the first point, as Krajinovic made an unforced error. Isner fired his 30th ace to raced out to a 3-0 lead. Krajinovic hit his 12th ace on the fifth point to claw his way back to 2-3. Isner held a 4-2 lead in the tie-break of the final set and was just three points from reaching his second consecutive final in Paris Bercy. Krajinovic got back the mini-break for 3-4, as Isner made a half-volley error. Krajinovic won the next two points to take a 5-4 with backhand down the line and a forehand error from Isner. Krajinovic hit a forehand return to earn a match point and closed out the match with a forehand into the corner.

The Serbian rising star dropped to his knees and kissed the court in joy. His euphoric coach ripped off his shirt to celebrate the incredible win.

Krajinovic, who was ranked world number 234 at the start of the season, will climb to at least number 33 next week, when the the new ATP Rankings will be released.

“The emotions are amazing. When I served for the match my hand was shaking. It was tough to control the emotions. It was the best day in my life but the tournament is not over yet”, said Krajinovic.

Isner fired 91 aces during this week but it was not enough to reach the final. He needed to win the title in Paris Bercy to secure the final qualifying spot for London. Only Jack Sock can overtake Pablo Carreno Busta in eighth place in the ATP Race to London, if he wins in Paris Bercy.

“It was very disappointing. I had an opportunity here to do some things I have never done before. I have been very close in tournaments, especially in Masters events. I just haven’t broken through. This one is going to sting because I knew I was the highest ranked player in the semifinals”, said Isner.

Related Topics:Filip Krajinovic
Up Next