Dimitrov and Sock fight for place in London final - UBITENNIS 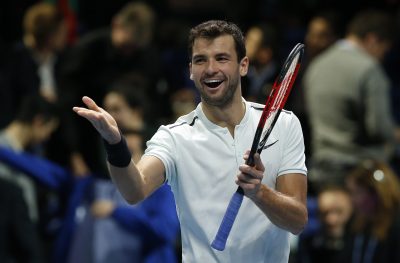 World No. 6 Grigor Dimitrov will battle Paris Masters champion Jack Sock in the semifinals of the ATP Finals on Saturday. Will the Bulgarian succeed in overturning his losing record against the American tonight?

Two-time Grand Slam semifinalist Dimitrov has been the most consistent player in the ATP’s year-end Championships. He has been even better than the firm favorite Roger Federer as he simply bludgeoned his way past the likes of David Goffin and Pablo Carreno Busta much to the delight of his ever growing army of fans in the British capital.

Such has been the dominance of the 26-year-old that he needed less than an hour to beat Rafael Nadal’s replacement, Carreno Busta in his final Group Pete Sampras contest on Friday. His victory against Goffin was even sweeter as he hardly had to break any sweat for his 6-0, 6-2 triumph over the Belgian star on Wednesday.

In fact, it would be an understatement to say that Grigor has been imperious of late; actually he has simply played like his idol, the great Federer. In essence, he has finally graduated from the Baby Fed tag at the event.

Looking to overcome his challenge will be the ninth-ranked Sock, whose run through to the last 4 stage of the competition has grabbed more eyeballs than Dimitrov’s perfect record in London. He has done a tremendous job of qualifying from a group that featured more prominent names of Marin Cilic and Alexander Zverev.

The man from the United States, who managed to secure his place in the tourney at the 11th hour, had his backs to the wall and was staring at defeat in the deciding sets of his clashes against Cilic and Zverev, before turning things around in his favor and eventually earning the right to fight Grigor for a place in Sunday’s showpiece final.

Once again, carefree tennis will be his mantra against Dimitrov as it has won him a lot of matches recently. “I’m playing with a lot of confidence as well, coming off Paris, playing here, winning some of my matches, getting into the semis”, Sock said. “I’m going to have fun, play big, play free, like you just said. That’s definitely not going to change. No one expected me to be here in the first place.”

Head-to-head: While Dimitrov beat Sock in their first ever meeting in Sweden in 2014, the big American has won their last three matches. His three match winning streak against Grigor started with a straight sets win at the 2015 French Open, followed by a comfortable victory in Montreal in the same year before completing his hat-trick at Indian Wells in 2017. However, predicting the winner in this match is a bit difficult as both the players are playing perhaps the best tennis of their lives, but Dimitrov has the slight edge as he is the more all-round athlete.

Alexander Zverev: “At the end of the year it was crap for me”