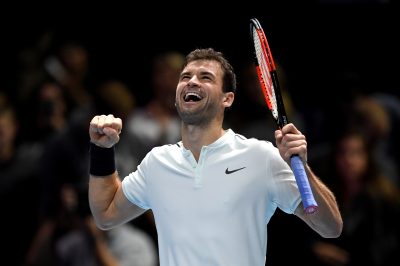 In an entertaining meeting of two top-10 players, Mr. Showtime Grigor Dimitrov will take on Rafael Nadal’s slayer David Goffin in the ATP World Tour Finals in London on Wednesday. Will Grigor be able to book his place in the tournament’s semifinals or will it be the Belgian who will have wild celebrations this afternoon in the British capital?

Bulgarian superstar Dimitrov came through a close three-setter against World No. 4 Dominic Thiem in his opening match at the O2 Arena, displaying every shot that is there in his book. He was off to a superb start as he cruised through the first set before a little loss in concentration cost him the second set. However, Dimitrov quickly regrouped to break the Austrian’s serve midway through the decider and eventually sealing the win in just less than two and a half hours.

After the win, Dimitrov stated he was completely overwhelmed by the support he received from the fans throughout the match. He said: “It, for me, was just one of those new experiences that I think I’m going to remember for the rest of my life, I think appreciate for the rest of my life. This is where I always wanted to be at, among the top players, also being able to come through in my first match, it’s only positive.”

Like Dimitrov, Goffin had an equally tough match against an injured Nadal, who pulled out of the event as soon as the match got over. Rafa was injured and the opportunity was there for the taking for Goffin but, it wasn’t as easy as it may sound. There’s no doubt that the World No. 1 was grimacing with pain and Goffin could see it that his opponent wasn’t all that comfortable on the court.

But the Spaniard’s tenacity still took him to a deciding set as Goffin failed to close out the match when the opportunity came his way in the third set. However, he somehow managed to overcome the doubts in his mind and wrapped up his first ever win over Nadal in two hours and 36 minutes. He was simply elated with his victory over the reigning French and US Open champion.

“It’s the best win of my career, for sure, to beat Rafa. But, yeah, I saw that he was struggling a little bit with his movement on the court, and his knee was suffering a little bit,” Goffin said. “It was tough even if he was not moving 100 per cent. He was hitting the ball really hard. It was not easy. It’s never easy to finish a match, to finish a set against him. Even if I lost four match points in the second, I had no regret. I kept going in the third.”

Head-to-head: Dimitrov holds a dominant 6-1 advantage over Goffin, with his only loss against the man from Belgium coming in Rotterdam early this year. Prior to that defeat, Dimitrov had registered comfortable wins over Goffin at the Australian Open and during his title run in Sofia. It shouldn’t be a surprise if Dimitrov is successful in extending his record to 7-1 today.