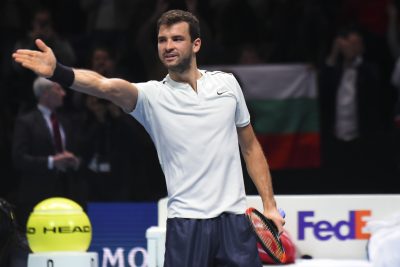 Newly crowned World No. 3 Grigor Dimitrov will challenge the supremely confident David Goffin for the biggest prize of his career in London on Sunday night. Will Mr. Showtime shed his Baby Fed tag and prove to his critics that he is the real deal by winning ATP’s year-end championships?

It has been a season to remember for the 26-year-old Dimitrov. In fact, he has finally lived up to the promise he showed as a youngster which led to his comparisons with Swiss maestro Roger Federer. After losing an epic Australian Open semifinal to current No. 1 Rafael Nadal and securing titles in Brisbane and Sofia, Dimitrov won his maiden Masters crown in Cincinnati just before the US Open to cement his place in the top-10 of the ATP rankings.

At the O2, Dimitrov has been virtually unstoppable. After making a sluggish start against Dominic Thiem in his tournament opener before prevailing 7-5 in the deciding set, Dimitrov has grown in confidence, dismantling Goffin and Pablo Carreno Busta in no time whatsoever, while he came back from a set down to end the American Jack Sock’s late-season surge in the semis on Saturday.

Twice before in his career Sock had beaten Dimitrov after going down a couple of match points and he was once again threatening to repeat the same feat after he saved three in the final set, but Grigor stayed calm and eventually came out as the winner after Sock committed a forehand unforced error.

Looking to stop Dimitrov’s charge will be Goffin, the man nobody expected to get past the great Federer, especially when he entered his semifinal clash against the 19-time Grand Slam champion with a 0-6 head-to-head record. However, not only he surprised himself, but also stunned both Roger and the huge army of his fans with a stunning display of power hitting from the baseline.

Undoubtedly, Goffin played the match of his life, showing his full repertoire on the court, frustrating the World No. 2 at times with the pace and depth of his ground-strokes. Initially, that result looked highly unlikely as Federer won the opening set in just 33 minutes, but the diminutive Belgian had other ideas.

While he went on to raise his level, Federer’s level suddenly dropped. Taking advantage of that situation, Goffin first went on to level the contest and then subsequently registered his maiden win over Federer, becoming just the sixth player to defeat both Roger and Rafa in the same tournament.

Head-to-head: Dimitrov is 4-1 against Goffin in their previous head-to-head matches and had annihilated him 6-0, 6-2 in their group clash on Wednesday. He is also the more complete player and would not want to let this opportunity slip away from his hands. On the other hand, Goffin would be feeling a little exhausted after his shock win over Federer which could prove to be undoing tonight.

Grigor Dimitrov: “To finish the year in the top three is a wonderful reward”