WTA Finals Draw: The Path To World Number One Is Revealed - UBITENNIS 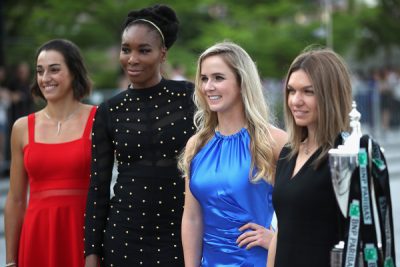 Simona Halep is the world number one heading into Singapore. (zimbio)

The path to becoming the year end world number one took shape as the WTA Finals draw was revealed on Friday evening in Singapore.

Seven players are in the hunt for the year-end world number one spot as the WTA tour draws closer towards its finale. Caroline Garcia is the only player who cannot be at the top of the rankings come a week on Sunday.

Simona Halep headlines the Red Group and she will be joined by Elina Svitolina, Caroline Wozniacki and Caroline Garcia as the Romanian hopes to hold onto her world number one spot.

Garbine Muguruza will headline the White Group and will face Karolina Pliskova, Venus Williams and Jelena Ostapenko in what looks like a group full of hard hitters.

The top two players from each group will qualify for the Semi-Finals next Saturday, with a knockout tournament taking place from that point onwards.

The White Group will start at 5pm local time on Sunday when Karolina Pliskova will take on Venus Williams. That match will be followed by Garbine Muguruza taking on Jelena Ostapenko in the battle of the grand slam champions.

While the Red Group starts on Monday at 7:30pm local time with Simona Halep and Caroline Garcia, in a rematch of the Beijing final. This will be followed by Elina Svitolina facing Caroline Wozniacki.

With the race to number one heating up, it is sure to be one of the most exciting WTA Finals to date as we will see who will be the best of the best next week in Singapore.

Related Topics:WTA Finals Singapore
Up Next

Elise Mertns and Monica Puig reach the semifinal in Luxembourg