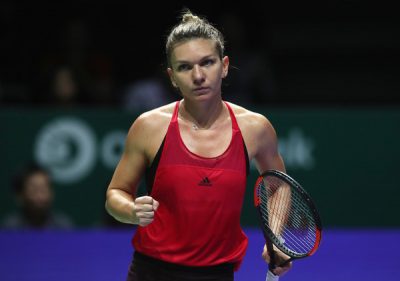 World number one Simona Halep started her Singapore campaign with a convincing 6-4 6-2 win over Caroline Garcia in the red group.

The 2014 champion benefited in the slow Singapore conditions as she outlasted Garcia in just under an hour and a half to begin her red group campaign with a victory.

Heading into this match they were at one win apiece, with Garcia winning their last meeting in a three set battle at the China Open final in Beijing.

However these were much slower conditions and therefore made it much harder for the world number eight to hit through the athletic Romanian.

Despite the scoreline, it was a tough start for Halep as she had to endure long service holds and had to save multiple break points from an aggressive Garcia.

Both players capitalised on their first break points during the first set as they broke in games five and six as the set was at 3-3.

However it was Halep who was the more clinical player as she dictated play on her return and eventually broke in the ninth game for a 5-4 lead.

The world number one, who has only won one title all season, eventually found her stride as she grabbed the opening set 6-4.

The second set was much easier for the top seed as she took command of the match and used her athleticism to chase down every Garcia ball with authority.

The world number eight had nothing new to offer and couldn’t find a way to take any of her three break point opportunities.

However Halep broke on both of her break point opportunities as the match ended with a hopeful and inaccurate challenge from Garcia.

Halep praised her own performance, ‘I played well and I feel great. Caroline beat me in Beijing but I also knew that we met in Toronto, so I had that in my mind.’

The Romanian began her campaign with a victory and will look to carry on that momentum on Wednesday when she plays the winner of the match between Caroline Wozniacki and Elina Svitolina, while Caroline Garcia will face the loser of that match.