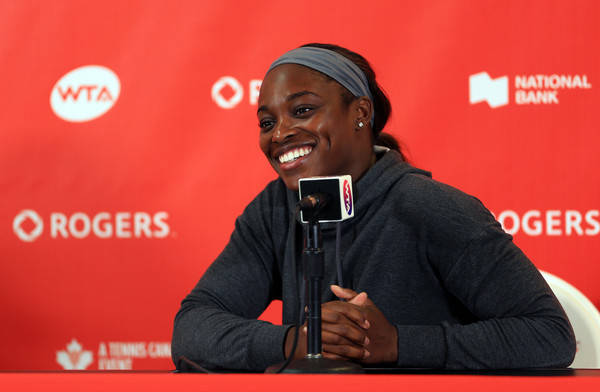 Sloane Stephens and Garbiñe Muguruza both recorded straight-set wins in the Cincinnati Masters Tuesday night, advancing to the second and third rounds respectively.

Stephens defeated world No. 36 Lucie Safarova 6-4, 7-6 (5). This was her second win over Safarova just in five days; the American won in three sets in last week’s Canadian Open en route to her surprise semifinal result.

Stephens — a wildcard because she was sidelined from the 2016 US Open until Wimbledon 2017 due to a foot injury — faces another Czech in her next match: two-time Wimbledon champion Petra Kvitova, who is having a successful comeback run of her own. Stephens played Kvitova seven days ago in Toronto, and won in three sets.

In Tuesday’s match, Stephens got the only break of opening set when, at 3-3, Safarova, down 15-40, missed a lefty forehand into the net.

Two holds later, Stephens hit cleanly through the ball to successfully serve the set out 6-4.

In the first game of Set 2, Safarova faced a break point to go down a set and a break, but the Czech swung a lefty slice serve hard to Stephens’s backhand side, and went on to hold.

Safarova was broken to love on her next service game, though, when Stephens pulled a crosscourt backhand winner for 2-1. But the American lost the break immediately on a backhand that flew just long.

Stephens later, with a backhand return winner, broke Safarova a second time. She consolidated for a 5-3 lead. Safarova then made it 4-5 before getting treatment on her right thigh during the changeover, needing break in the next game to stay in the match.

To the shock of many, she pulled it off, breaking Stephens with a backhand return down the line for 5-5.

Two holds later, the score was 6-6. Stephens, with an ace, took a 3-0 lead in the tiebreak. At the changeover, she led 5-1. Then Safarova caught fire. She tied it 5-5 with a forehand winner down the line. But Stephens had a match point at 6-5, which she won with a forehand pass to seal the victory.

Fantastic match point from @SloaneStephens to close out another hard-fought win over Lucie Safarova. #CincyTennis pic.twitter.com/pqtCTT6a8t

The Wimbledon winner got out to a double-break lead in the first set when Haddad Maia double-faulted into a 2-5 deficit. Muguruza then held to take the first set 6-2.

Muguruza broke in the first game of the second with a backhand down the line, and the rest was smooth sailing. Muguruza won the remaining five games for a bagel.

Next, Muguruza plays the winner of Daria Kasatkina and the Stanford champion, 16th seed Madison Keys.

“I felt like a lot of games were very tight,” Muguruza said after the match. “It was a strange result because the match was pretty good.”