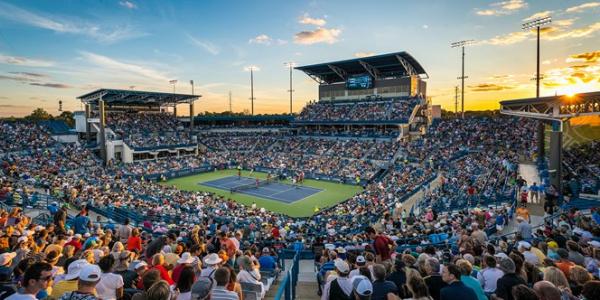 At a media event today, the Western & Southern Open, an ATP World Tour Masters 1000 event and a WTA Premier 5 event, revealed a brand new $25 million upgrade to the Center Court with a new South Building.

An event constantly upgrading and growing, the Western & Southern Open, an ATP World Tour Masters 1000 event and a WTA Premier 5 event, revealed at a news event today a brand new $25 million upgrade to the Center Court, with the stunning addition of a massive South Building expansion. The new building is set to be five stories tall and ground will be broken at the Lindner Family Tennis Center in Cincinnati immediately following the conclusion of the 2017 tournament to be ready for the 2018 tournament.

The structure will replace the current building on the southern side of Center Court and will more than double the interior space for fans and amenities on offer. Overall, Center Court seating will increase to 11,750 from 11,467. The building will be complete in time for next year’s tournament, August 11-19 of 2018.

The new 40,000 square foot, 104-foot-tall building will be constructed between Center Court and Grandstand, with different levels offering views of one or both show courts.

The new South Building will feature on the second floor air-conditioned box seats, on the third floor grandview boxes, on the fourth floor all-inclusive suites, and on the fifth floor TV commentary booths.

Also an exciting announcement for 2018 @CincyTennis the South Building on Centre Court set to break down in August 2017, ready for 2018. pic.twitter.com/sLX8RBtYuc

“The building is chock-full of amenities. Every square foot was designed with the intention of bringing the things that fans need — restrooms, bars, concessions and air conditioning — to these new areas. We’re especially excited about the climate-controlled box seats, truly an innovation in the sport of professional tennis,” said the architect of the new Sout Building, Greg Jacoby.

For further information on the new South Building and to reserve seats for the 2018 tournament, head to https://www.experiencesouthbuilding.com/.