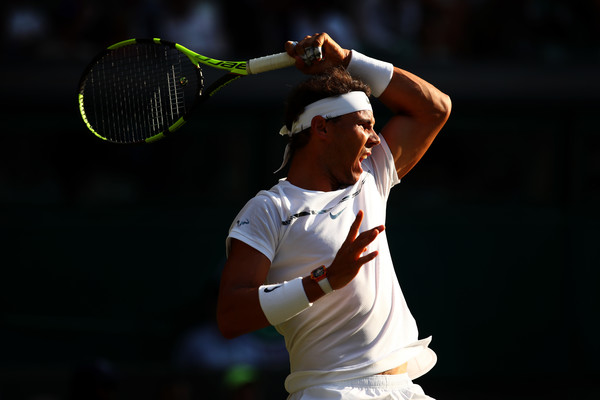 Fourth seed and two-time former champion Rafael Nadal kept up his strong Wimbledon showing so far, moving past American lefty Donald Young 6-4 6-2, 7-5 into the third round at the All England Club.

15-time Grand Slam champion and world number two Rafael Nadal powered past American left-hander Donald Young 6-4, 6-2, 7-5 to reach the third round at Wimbledon for the first time since 2014. The two-time former champion kept up his strong form so far at SW19, blasting an impressive 37 winners to only 16 unforced errors in a solid two hours and 11 minutes.

“It was a good match again. Almost all the time more or less under control.” Nadal evaluated about his performance.
“I think I played a solid match. Serving well. It’s true that in the third I served a little bit worse. But in general terms, I am happy. I played well.” He later added.

In the opener, the tone was set early by Nadal as the fourth-seeded Spaniard took an immediate break of the Young serve on his first time of asking before backing that up with a comfortable hold to race out to an early lead as the American’s forehand let him down. The pair took care of their serves in routine fashion for the next six games as the scoreline moved to 5-3 with Young looking to serve to stay in the set. The world number 43 managed to hang onto his serve to force the two-time champion to serve out the first set, something Nadal did with ease as he held to love to close out the opening set 6-4 off another Young error.

The second set began with a case of deja vu for the unseeded American lefty as Nadal broke in the opening game of the second set just like in the first, taking the advantage on his first time of asking to go up 2-0 after consolidating the lead. Nadal and Young shared holds of serve the following two games before a determined world number two was able to once again push Young on his serve, eventually breaking through on his fifth time of asking to seize the double break for a 4-1 lead.

The 15-time major winner continued to steam ahead as he held with ease again, forcing the American to serve to stay in the second set. Young was able to force the two-time champion to serve for a two-sets-to-love lead but Nadal made no mistake with his opportunity, withstanding two impressive volley winners from Young on set point to save a break point and convert his third set point to take the second set 6-2 and move one set from the third round at SW19. 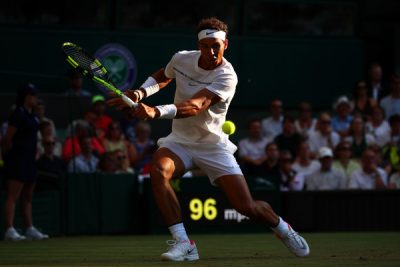 The first six games of the third set featured both players untroubled on their serves, as neither faced a break point to bring the score to 3-all. Multiple errors the following game from Young gifted the Spaniard the break for 4-3 before the two-time champion backed that up with an easy hold to love punctuated by a big ace to go up 5-3. Looking to serve to stay in the match, some confident play from Young helped him to edge his way to a hold and force the fourth seed to serve out the second round win. A poor service game as he looked to close out the match from Nadal gifted the break to Young as on only his third break point of the match, a lucky net cord went the American’s way to level the set at 5-all.

Despite being broken as he attempted to serve for the match the prior game, the two-time champion bounced right back, punishing the Young serve to take a routine break off a big forehand winner and give himself another chance to serve out a spot in the third round. This time around though Nadal made no mistake of his opportunity, serving out the match to love to win 6-4, 6-2, 7-5  and move onto the third round at Wimbledon.

Embarking upon the third round at SW19 for the eighth time in her career, Nadal’s next test will be Russia’s Karen Khachanov. The Spaniard is fully aware of the threat he faces. The two have previously practice together on multiple occasions with Nadal describing the 21-year-old as ‘a great player in all aspects.’

Nadal respect for his younger opponent is one of the reasons why he refuses to get ahead of himself in the draw. Despite recently winning his tenth French Open title, the grass has been a surface that has brought mixed feeling for Nadal over the years.

“I don’t know how deep I can go on the draw or not, but I really don’t think about that now.” He explained.
“The only thing is today I won another match here in Wimbledon. That mean a lot to me. I’m happy tomorrow I have a practice day, and then after tomorrow again another  match.”

If everything goes according to the seedings at Wimbledon, Nadal will play Andy Murray in the semifinals. The winner of that match would become world No.1.