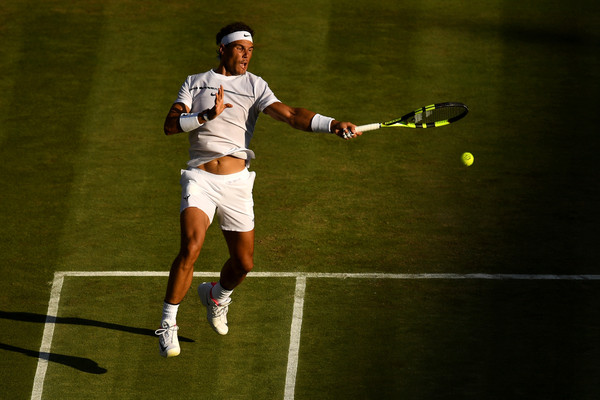 Fourth seed and two-time champion Rafael Nadal kept up his strong form here at SW19, powering past a talented opponent in 30th-seeded Russian Karen Khachanov 6-1, 6-4, 7-6 to reach the second week at Wimbledon.

Looking to book his place in the second week at Wimbledon for only the second time in the last six years, 15-time Grand Slam champion and world number two Rafael Nadal put up a dominant serving display to move past big-hitting 21-year-old Karen Khachanov 6-1, 6-4, 7-6 to reach the fourth round. The Spaniard took impressive control of the match, cracking a huge 41 winners to only 19 unforced errors to keep up his superb form here at the All England Club and move into the second week in two hours and 15 minutes on Centre Court.

In the opening set, it was Khachanov’s struggles on serve that set the tone for the set, as the young Russian was broken to 15 on Nadal’s first time of asking in both the second and fourth games of the set to give Nadal a dominant 4-0 lead early on. A very loose service game followed from the fourth-seeded Spaniard though as four uncharacteristic errors in a row gave the 3oth seed one break back.

Despite the wobble on serve, the two-time champion got right back up and picked up where he left off the prior game, forcing some wild errors from the 21-year-old to secure the double break lead for a second time and put himself a game from the first set at 5-1. Looking to serve out the opening set, Nadal was ruthless as he closed it out to love, with a big forehand winner and an ace helping punctuate a dominant first set, taken in only 22 minutes from the 15-time major champion. 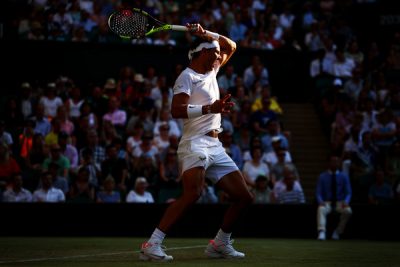 The second set featured more dominant serving from the world number two, but Khachanov was also able to raise his level and settle in throughout the set. After saving three break points in the opening service game for the Russian and a routine Nadal hold, the Spaniard was able to break the 21-year-old’s serve once again on his fourth time of asking to go up 2-1.

The pair then exchanged holds of serve the following five games for 5-3 before some impressive shot-making from the 30th seed helped him save set point and force the fourth seed to serve for a two-sets-to-love lead on Centre Court. Just like in the first set, Nadal made no mistake with his opportunity, once again serving the set out to love to secure a seemingly unassailable two-sets-to-love lead over the 21-year-old.

The third set featured more confident serving from both as some early jitters from Khachanov and late wobbles from Nadal resulting in break points were all saved until a third set tiebreak was reached following a set point saved with a crafty drop shot from the Spaniard.

In the tiebreak, it was all Nadal as the two-time champion was able to force his young Russian opponent to blink in the fourth and fifth points of the breaker and later on in the ninth as he rode three mini breaks to win the tiebreak 7-3 and defeat Khachanov 6-1, 6-4, 7-6 to move into the second week here at Wimbledon without the loss of a set. 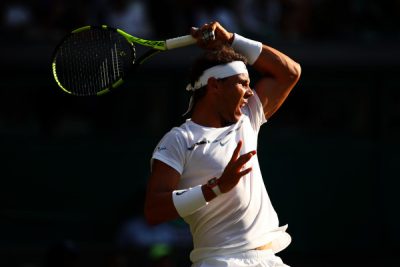 Following the match in his post-match interview, Nadal said, “For a while I played fantastic, in the first set and a half, it was a great level,” said the two-time champion. “Then it was a little bit tougher.”

“I played some good shots, from the forehand and the backhand,” the fourth seed said. “Happy with almost everything. But in the third, I started to play a little bit shorter.”

Nadal will next face big-serving ‘s-Hertogenbosch champion Gilles Muller of Luxembourg, who he lost to here at Wimbledon back in 2005. “He’s a very good opponent,” said the Spaniard. “Grass is his best surface – it’s going to be a tough one. I need to be very aggressive, and very fast with my legs,” concluded the 15-time major winner.

Johanna Konta into Week 2 of Wimbledon for first time