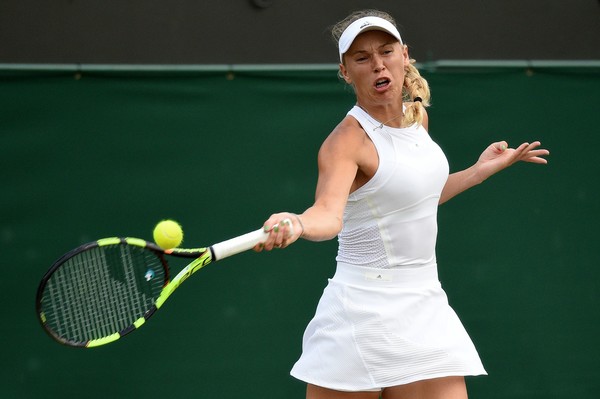 Fifth seed and former world number one Caroline Wozniacki beat the fading light and a tricky opponent in former semifinalist Tsvetana Pironkova 6-3, 6-4 to reach the Wimbledon third round.

Former world number one and fifth-seeded Dane Caroline Wozniacki fought past a tricky customer in Tsvetana Pironkova, avoiding sunset on No. 2 Court at the All England Club to move into the third round 6-3, 6-4. Looking to reach her first Wimbledon quarterfinal, Wozniacki controlled her game well throughout, cracking an impressive 26 winners to tame the erratic game of the unseeded Bulgarian and advance here at SW19.

” I was happy with the match today. She’s a tricky opponent. Definitely wasn’t easy. So I was happy to get the win.” Said Wozniacki.
” I thought I played aggressive as well, defended where I needed to. Yeah, it was a good match all in all.”

In the opening set, it began fairly evenly for both players, as Wozniacki and Pironkova exchanged holds of serve before the Dane broke only for her to be broken back for 2-all. After a routine hold from the Bulgarian for 3-2, the fifth seed and former world number one saved a break point the following game to hold on for 3-all. A loose service game from former semifinalist Pironkova and a strong backhand winner from Wozniacki gave the world number six a break lead once again for 4-3. The two-time US Open finalist took care of her serve easily for 5-3, forcing the unseeded player to serve to stay in the opening set. Three powerful winners off the ground helped Wozniacki to secure the double break easily and with it take the first set 6-3. 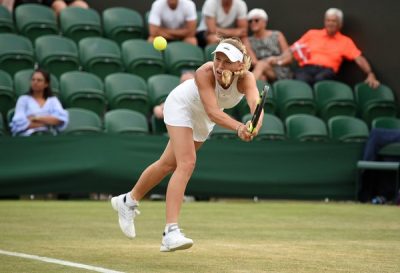 The second set began similarly to the first as both players split holds of serve to 2-1 before two powerful forehand winners from the former world number one the following game earned Wozniacki the initial break for 3-1. That advantage was short lived though as Pironkova bounced back immediately, breaking the Dane to snatch the break back for 3-2. The pair then took care of their serves in routine fashion for both for 4-3 before the Bulgarian scraped out a gutsy hold for 4-all with a confident forehand winner.

With the fading light dimming at around nine in southwest London, Wozniacki seemed to be rushing to book her place in the third round and get off court, continuing to stay solid on serve as she took another routine hold of serve for 5-4, putting the pressure on Pironkova once again to serve to stay in the match. An untimely double fault and a loose volley from the unseeded Bulgarian cost Pironkova dearly as another forehand flew long to give Wozniacki the win 6-3, 6-4 to reach the third round at Wimbledon.

” I was trying not to think too much about it. I knew it was going to get dark out there. I was trying to keep my focus and trying to win in two sets.” She said about beating the darkness to win.

Wozniacki will play Anett Kontaveit in the third round.

Wimbledon Under Fire Over Allegations Of Poor Quality Courts From Players

Angelique Kerber Rises To The Occasion As Pliskova Falls At Wimbledon