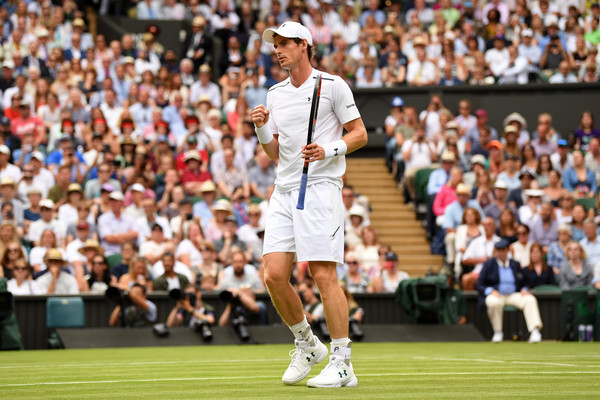 Andy Murray came through a potentially tough challenge against the dynamic Dustin Brown with flying colours to ease his way into the third round at Wimbledon 6-3, 6-2, 6-2 after one hour and 36 minutes.

The world number one was far too good for his German opponent throughout and despite being close in the first set at three games all, once the Brit got the break there was only one winner. Murray was pleased with the way he served but admitted that the last few service games were a bit shaky and despite winning 84% of the points behind his first serve it only found the mark 47% of the time. Any questions over his fitness and physical problems were put to bed after the the top seed darted around the court and in a post-match interview assured that the hip was fine and he was pain free.

This contest did not disappoint early on and was a joy to watch from the start. In a match full of audacious drop shots and well executed lobs Murray earned his first break point chance in the fourth game. That opportunity quickly passed the Brit by as Brown fired down a huge serve before putting away a volley which caught the back edge of the baseline. Enjoying his time out on Centre Court where he has enjoyed previous success he continued to hold to stay with the world number one, wowing the crows with his shot making ability.

For Murray it was a case of sticking with the German in the early exchanges, focusing on his own game and leaving his opponent to produce flashes of brilliance at times, but there was always going to be the likely chance that Brown’s game would break down. That moment came in the eighth game after the German squandered a chance to hold before double faulting to hand the top seed the first break of the match. That poorly timed error played heavily on Brown’s mind as the defending champion quickly made it through his service game to close out the first set 6-3 after 35 minutes.

The world number one had an excellent chance to dominate at the beginning of the second set but grew frustrated after missing an attempted backhand cross court pass at break point. Brown saved a second break point with a swinging drive volley winner going back behind the Brit and subsequently held to move 2-1 in front.

The Brit was not to be disappointed for long as he brought up two more break points on the Brown serve. The German saved both once again with two spectacular drop volleys, but Murray forced his way to a third opportunity with some aggressive service returns to secure the break. After the world number 91 squandered a couple of chances to hold in the seventh game the top seed hung tough and began to join in playing cat and mouse with his opponent, securing a double break to take firm control of this second round match. With a healthy lead intact, Murray swiftly served out the set by six games to two to take a two sets to love lead after just over an hours play.

Murray was not in any mood to let up in his level of play and Brown was certainly tiring physically as we entered the third set. The British number one broke the German in the third game and yet again in the fifth game to move just two games away from victory. With talks turning towards Murray’s third round match the top seed threw in two unexpected double faults to fall down 15-30 on serve. The Brit regrouped to fire an amazing forehand cross court passing shot winner and an unreturned serve help recover the situation and hold for 5-1.

Brown forced his opponent to serve it out and Murray duly obliged, closing it out on his second match point after the German netted his attempted drop shot return of serve.

The two-time Wimbledon champion will now face 28th seed Fabio Fognini in the third round after the Italian defeated Jiri Vesely in straight sets 7-6(3), 6-4, 6-2. Their head to head record is currently tied at three wins apiece but Friday will be their first meeting on grass, a surface where Murray has a far superior record and pedigree over the Italian number one.