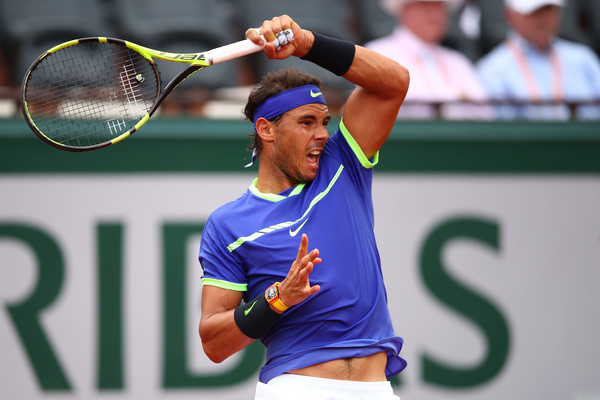 A day after his 31st birthday, Rafael Nadal looks about as dominant as ever on the red clay of Roland Garros.

In Set 1, Nadal took the first break of the match at 15 for a 2-0 lead by sliding into a short forehand drop shot. In the next game, though, Nadal double-faulted, setting up a 15-40 situation. He then missed a forehand long, giving Bautista Agut his first game and putting the set back on serve.

Nadal then regained the one-break lead for 3-1 after a series of missed forehands from Bautista Agut. He went on to save two break points, one with a backhand pass, to go up 4-1.

In the game that followed, Nadal broke Bautista Agut’s serve yet again on a crosscourt backhand. He then backed the break up by serving out the 6-1 baguette.

Bautista Agut began the second set by holding to love. But his next service game was a marathon one, and Nadal won it with a dink forehand pass to take a 2-1 lead. Nadal, then consolidated the break to love.

Bautista Agut later gave up a second break via a double fault for 2-5. Nadal then held to love for the second set.

Bautista Agut was barely able to hold his serve to start the third set, having to fight off three break points.

Nadal, down 1-2 on serve, faced a break point, which he eliminated with a crosscourt forehand winner. He then completed the hold.

And at 30-40 in RBA’s next service game, Nadal jumped on a second serve to hit a forehand return winner down the line for a 5-2 advantage. He then held for 6-2.

In the quarterfinals, Nadal will play the winner for No. 5 seed Milos Raonic and No. 20 seed Pablo Carreño Busta.

The world No.90 landed himself in some hot water after making some comments on the No Boundaries podcast.

Tennis star Nick Kyrgios says recent comments made by him on a podcast were taken out of context after he was accused of calling for next year’s Australian Open to be cancelled.

The former top 20 player spoke about the upcoming event and other issues on the No Boundaries podcast which he is a co-founder of. During one part of the discussion, Kyrgios said that he doesn’t think that the Australian Open should go ahead due to the ongoing COVID-19 pandemic. The country has had one of the strictest rules in the world regarding the pandemic with many cities being placed into a lockdown for almost a year and heavy restrictions being placed on international travel.

‘I don’t think the Aus Open should go ahead, just for the people in Melbourne – you’ve got to send a message,’ Kyrgios said on the podcast.
‘How long did (Melbourne) do in lockdown? 275 days or something?’

However, the 26-year-old later clarified his comment and said his point was more about the people living in Melbourne and not that the tournament should be cancelled. Kyrgios reached the quarter-finals of the Australian Open back in 2015 and has made eight consecutive appearances in the main draw. This year he reached the third round before losing to Dominic Thiem in five sets.

“To say that I’d want the Australian Open cancelled, I think that was the sentence that got taken out of context,” he said in a video on his Instagram account. “It’s more so for the people of Melbourne who have gone through hell and back. I think it’s been … nearly 300 days of lockdown and your freedom has been, you know, taken away from you.”

Next year’s Melbourne major is still yet to publicly confirm their entry requirements amid growing speculation that players will only be allowed to play in the tournament if they are fully vaccinated against COVID-19. This is due to a health mandate being implemented in Victoria which requires all essential workers, including elite athletes, to be vaccinated. Premier Daniel Andrews has previously told journalists that he would not be making any exceptions to the rules for players.

Weighing in on the topic of vaccinations, Kyrgios said the idea of having a policy on Tour which requires all players to be vaccinated is ‘morally wrong.’ Novak Djokovic is among a group of players who have not revealed their vaccination status. Prompting speculation over if he will travel to Australia next January or not.

“(NBA player) Kyrie (Irving), Novak (Djokovic), these guys have given so much, sacrificed so much,” Kyrgios commented. “They’re global athletes who millions of people look up to and I just feel like it’s so morally wrong to force someone to get vaxxed. There’s other solutions around it.”

However, Kyrgios has also said that he thinks it is ‘morally wrong’ for unvaccinated players to be allowed in Melbourne.

“I don’t think it’s morally right to accept players from overseas that aren’t vaccinated to come into our country.” He stated.

One of Federer’s coaches has issued an update concerning his recovery from injury.

It appears that Roger Federer’s return to professional tennis will not occur in Australia after one of his coaches described the chances of him playing in the first Grand Slam of 2022 as ‘very few.’

Ivan Ljubicic has issued an update on the 20-time Grand Slam champion who has not played since his quarter-final loss to Herbert Hurkacz at Wimbledon. Shortly after that defeat, Federer underwent a third operation of his knee following a consultation with his medical team. He has already undergone two minor surgeries on his knee during the first half of 2020, as well as a separate procedure back in 2016.

Speaking in Zurich during a sponsor event for Mercedes-Benz back in September Federer said ‘the worst is behind him’ but he is taking his recovery slowly. Speaking about his progress earlier this week, coach Ljubicic said the Swiss maestro is unable to recover ‘as quickly as he used to’ due to his age. Admitting that the prospect of Federer returning to action at Melbourne Park is unlikely.

“I think there are very few chances, he is still recovering and knowing him, he wants to be sure he can play to win the tournament and be at 100%,” Ljubicic told Stats Perform.
“So I think the Australian Open is not a real possibility right now. But he will go step by step because he is 40 years old now and he needs to be patient. He cannot recover as quickly as he used to.”

Federer has won six out of his 20 major titles at the Australian Open with the most recent occurring back in 2018. He also missed the tournament this year due to his knee. Prior to this, he had made 21 consecutive appearances at Maelbourne Park (2000-2020).

However, Ljubicic is optimistic that Federer will return to competition and retirement talk is currently not on the cards despite his age. According to the ATP, only six players older than Federer have an official ranking but none of those are currently ranked in the top 200. Although Feliciano Lopez is the same age as him but is a couple months younger.

“We have spoken and I can guarantee he wants to return to playing tennis. When he decides to stop he will retire, but I don’t think it’s going to happen all of a sudden.” Ljubicic stated.

During his career, Federer has won 103 ATP titles and has earned more than $130M in prize money.

It is looking increasingly doubtful that unvaccinated players will be allowed to play in the Grand Slam. 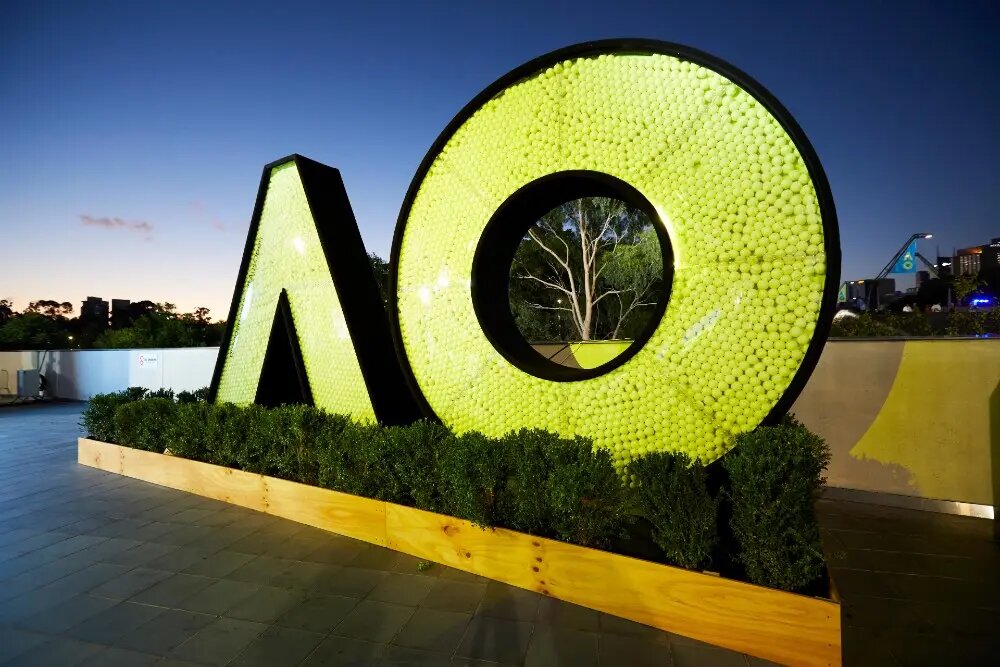 With just over two months until the start of the Australian Open there is still confusion over what the entry requirements will be for players who have not been vaccinated against COVID-19.

There is speculation that those who have not been jabbed against the virus may be banned from playing at the Grand Slam tournament which will begin on January 17th. This is due to a health mandate implemented in Victoria which requires all essential workers, including athletes, to have their vaccinations. However, no official announcement has been made despite the new season beginning in less than eight weeks time.

Craig Tiley, who is the head of Tennis Australia, was questioned if unvaccinated players will be allowed to play in Melbourne on Tuesday at a special media event marking the announcement of Dylan Alcott’s retirement. However, the tennis official refused to shed light on the current situation.

“I just want this to be about Dylan today and then I’ll take any of those questions another time,” the Australian Associated Press quoted Tiley as saying.

It is understood that more information about the 2022 Australian Open will be announced next week at the ‘official launch’ of the event. However, this doesn’t mean that all details about the event will be disclosed.

On the same day as Tiley’s comment, Victorian Premier Daniel Andrews reiterated his stance on the matter by stating he will not be applying for any exceptions to be made for tennis players. In a leaked letter issued by the WTA Players Council, one of the possibilities being discussed was allowing unvaccinated players to participate providing they go through a strict quarantine upon arrival in the country.

“I’m not going to have people sitting in the grandstands having done the right thing, only to have millionaire players that ought be vaccinated running around the place being essentially at such higher risk of spreading this – getting it and giving it,” Andrews said.

Novak Djokovic and Daniil Medvedev, who contested the final of this year’s Australian Open, have refused to disclose details about their vaccination status. Meanwhile, others such as world No.9 doubles player Pierre-Hughes Herbert admits he is yet to be fully vaccinated.

“It’s a bit complex, because personally I’m not vaccinated. I don’t know if I will have time to do the two jabs and be vaccinated,” Herbert told reports in Paris on Sunday.
“It’s a bit difficult to tackle this subject right now. This situation in Australia is not very much open for discussion and open.”

Fellow French doubles player Nicolas Mahut said he received one vaccination shot three months after testing positive for COVID-19. Although this may not be enough to guarantee him entry into Australia.

“If I need a second jab after the Davis Cup, we don’t have a large window, so that’s it. The situation is not easy for me, as well,” he commented.

According to figures provided by both the ATP and WTA, more than 50% of players have been fully vaccinated.