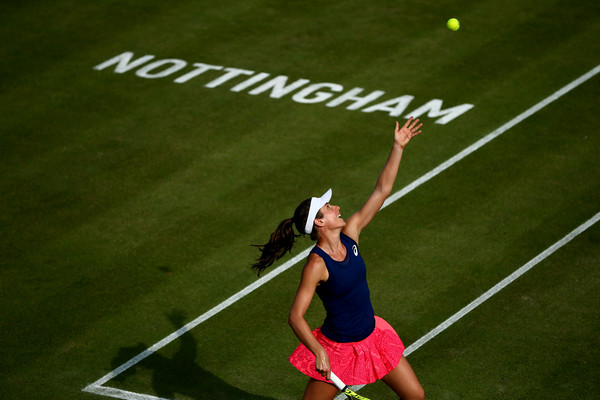 Johanna Konta kept her strong run going on home soil at the Aegon Open with another straight sets win this time over Ashleigh Barty 6-3, 7-5 in Nottingham.

The top seed’s depth with her groundstrokes in tricky conditions gave her a good start against her Australian opponent, with two breaks of serve helping her take the first set. The world number eight went down a break early in the second set but rallied back and despite having two match points in the 10th game and managed to hang in and secure victory in the 12th.

In the players first meeting, Konta made a first start just as she did against Yanina Wickmayer in the second round. The British number one broke Barty in the third game of the match and established a 3-1 lead in the first women’s quarterfinal match of the day. The top seed had two break point chances to extend her lead but her opponent responded brilliantly to win four points in a row finishing with an ace to keep just one game behind.

Barty was struggling to deal with the depth of the Brit’s groundstrokes as she found herself facing two break points again. As she did in the previous game the Australian served her way out of trouble, also saving a third break point with an ace and a fourth with a one-two punch combination as well. Barty then sealed the game with her fifth ace of the match so far.

Konta held a very impressive service game to love hitting two aces and an unreturned serve and took her chance on the Australian’s serve as she closed in on the first set. The top seed struck two exceptional forehand winners to earn set point and Barty went long with her backhand to wrap it up for the Brit 6-3 after 40 minutes of play.

Having had the warning signs in the previous service game Konta could not prevent facing her first break points in the match in the fifth game. The Brit saved the first but her drop shot on the following point was not up to standard as Barty lined up and executed the backhand cross court pass winner to seal the break.

The top seed, who was yet to drop a set this week responded and raced to a 0-40 advantage on Barty’s serve in the eighth game. The Australian saved the first two, but a perfectly executed backhand lob from the Brit sealed the break back before a hold of serve moved her one game away from the match.

Konta had two match points in the tenth game but Barty continued to play the break points well, serving big to dig herself out of the hole to hold and level at 5-5. The Australian could not keep up her resistance in the twelfth game however, having had two chances to hold, Konta came back at her and secured victory after a double fault from her opponent.