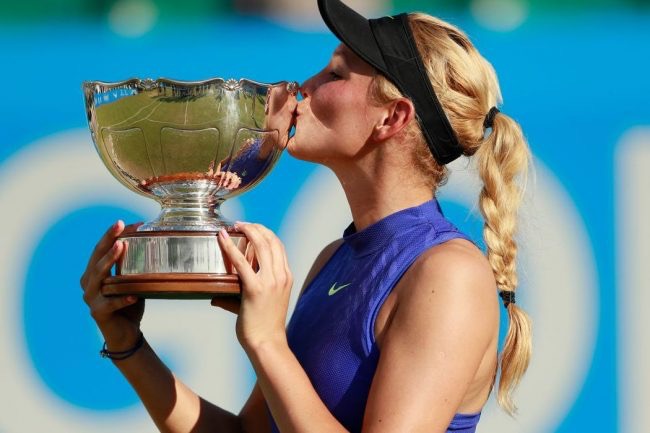 Donna Vekic celebrated winning her first WTA grass court title and the second of her career overall after she came back from a set down to stun top seed and British hope Johanna Konta 2-6, 7-6(3), 7-5 at the Aegon Open in Nottingham.

The 20-year-old was closer to the Brit than the scoreline suggests in the first set and managed to turn game points into conversions in the second which helped her get over the disappointment of missing out on three set points during the set to take it on a tiebreak. Vekic broke immediately in the final set but the world number eight came back midway through to make it anybody’s title to win at five games all. It was at that point which the Croat raised her level to new heights which Konta was unable to reach and as a result she sealed victory and lifted the Elena Baltacha Trophy for the first time.

It was Konta who was victorious in the only previous meeting between the two players on the hard courts in Cincinnati last year, with the Brit winning comfortably 6-2, 6-3. Heading into the final Konta was yet to drop a set and came through against Magdalena Rybarikova 6-2, 7-5 in her semifinal. Vekic came through in far tougher circumstances in a two hours and 48 minutes battle with fifth seed Lucie Safarova 7-6(5), 3-6, 7-6(4), which stood her in good stead in the latter stages of the final on Sunday.

Konta looked as though she meant business from the start and made a real statement as she broke Vekic to love in the opening game of the match. The Brit’s run was halted slightly when under pressure at 30-30 in the next game but she came through unscathed to make the perfect start.

The top seed had the chance to extend her lead in the fifth game with two break opportunities, but it was the 20-year-old who came through the long tough battle to keep her first set hopes alive. That hold looked to be crucial as Vekic set herself up for two break back points but she missed the first with a wide forehand before Konta hit an ace before holding to stay in front.

The world number eight regained her form that she had shown at the start of the match to break her opponent once again and played an emasculate service game to close it out. The Brit hit an ace and three unreturned serves to hold to love and seal the first set 6-2 after 37 minutes.

Konta had a couple of opportunities to take full control of the final with break points in the third game but was unable to capitalise and it proved costly. Vekic began to outhit the Brit when she was able to return her serve into play and that allowed her to break the top seed for the first time in the match to take a 3-1 lead.

Play continued to go with serve, but the top seed came under pressure down set point in the 10th game. Konta was able to save it and survive by saving another two in the 12th game following unforced errors from Vekic to force a tiebreak.

There was nothing to split the two in the breaker at 3-3, but it was the 20-year-old who broke away with some excellent serving under the circumstances to take control and win the tiebreak by seven points to three. That was the first set which top seed had lost in the entire tournament.

With the momentum behind her Vekic continued to play aggressively and really take Konta’s time away. The world number 70 crushed three forehand winners in a row to break the Brit in the opening game of the final set to take the lead in the final for the first time.

Vekic maintained her advantage up until the sixth game when the Brit forced the Croat into making errors to bring up two break back points. The top seed only need the one chance and proceeded to hold to love to move 4-3 in front.

Aside from the blip in the sixth game Vekic was most impressive on serve, continuing to hold comfortably to pile the pressure back on the top seed. The 20-year-old held to love in the 10th game and earned two break points on the Konta serve. The world number eight saved the first but could not prevent her opponent from taking the second as she closed in on victory.

When serving for the title Vekic watched her lead move from 30-0 to 30-30, but the 20-year-old held her nerve to win her first WTA title in three years in two hours and 29 minutes.