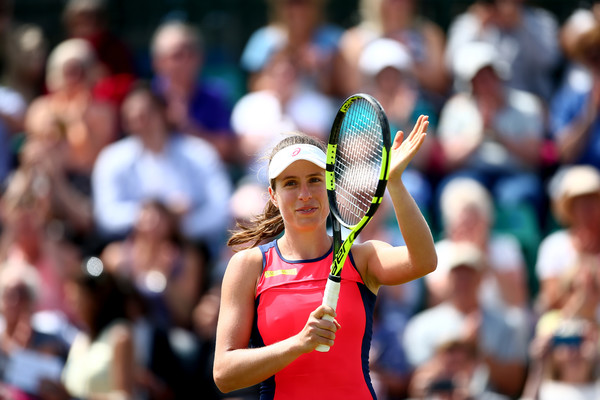 Johanna Konta has become the first British woman to reach the final in Nottingham when it has been a WTA event since Virginia Wade in 1973 following her semifinal victory over Magdalena Rybarikova 6-2, 7-5 at the Aegon Open.

The Brit is yet to drop a set en route to the final as she seeks her first grass court title and won five games in a row to come from 2-1 down to cruise through the opening set. The second set was a much tougher battle, with Rybarikova coming back from a break down to make the set go deep. The Slovakian was just two points away from forcing a decider in the 10th game, but the top seed held her nerve, secured a break in the following game and served it out to book her place in the first grass court final of her career.

These two players had met once before prior to this match and it was on the gras courts at Nottingham two years ago in the first round where the Brit won in straight sets 6-3, 6-3. Konta had been in fine form so far this week and was yet to drop a set, meanwhile her opponent ranked at 117 in the world had also quietly impressed, only dropping the one set en route to the last four in her second round match against Alison Riske.

In the opening exchanges Rybarikova was not giving much away in terms of errors and forced the Brit to work hard to hold, recovering form 15-30 to level at two games all. However, it was Konta who made the first breakthrough in the next game, hitting a cross court backhand winner to earn two chances. A netted backhand from the Slovakian was all that was required to hand the top seed the advantage.

Rybarikova had a few line calls and a few umpire’s decisions go against her over the course of the set and that appeared to eat away at her as the Slovakian looked rather disinterested in the next game. A couple of loose errors and missed returns helped Konta to hold to love and secure the set 6-2 after 34 minutes of play.

The Brit got off to the perfect start in the second by getting an immediate break as her opponent continued to look rattled following a double fault. Rybarikova regrouped and broke back immediately before Konta spurned another opportunity to break in the third game.

After a series of service holds Konta battled hard when just two points away from dropping the set down 5-4, 15-30 and was rewarded in the next game with a break following another double fault from the Slovakian.

When serving for the match the top seed squandered one match point but sealed victory on the next after a top spin forehand from Rybarikova went long.

Lying in wait for the home favourite in Sunday’s final will be the winner of the match later on today between fifth seed Lucie Safarova and Donna Vekic.