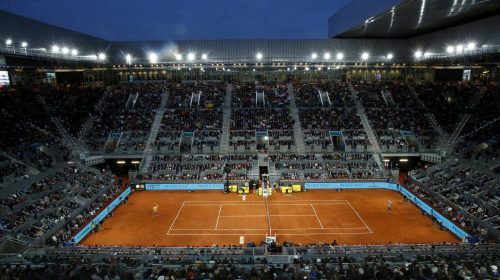 Simona Halep won the women’s final by beating Svetlana Kuznetsova 10-6, and Grigor Dimitrov won the men’s championship with a 10-7 win over Feliciano Lopez.

Keys looked strong on her serve and forehand, but she got broken twice on missed backhand volleys, which ended up costing her the match.

It was an inconsistent showing from both players, but Evans was the sloppier of the two. Still, the Brit nearly mounted an impressive comeback; he was down 2-8 at one point and managed to bring the score to 12-12.

Unlike Evans, Radwanska completed her comeback. Muguruza got off to a 5-1 start, but Radwanska then won nine consecutive points.

The Madrid native breezed passed the world No. 14.

The 2014 French Open finalist steamrolled over the 2017 Miami champion.

Sock took some massive cuts on his forehand, but not all of them paid off.

Sharapova showed flashes of the greatness that got her five Grand Slams, but she was ultimately outplayed in the nine-minute mini match.

The biggest name in the men’s draw fell behind 0-6 heading into the changeover. Lopez’s domination then continued to complete the breadstick.

Kuznetsova straight-up outhit Radwanska, who has had a disappointing 2017 so far by her standards.

Dimitrov overcame an early deficit to put away the local favourite.

There it is. Grigor Dimitrov books his place in the mens #TB10Madrid Final with a huge booming ace. Certainly kept his eyes on the prize. pic.twitter.com/d0uZ2GPfX5

Halep advanced to the final with a forehand winner.

Halep just loves the #CajaMagica! She cruises past Monica Puig to set up a final against Kuznetsova! #TB10Madrid pic.twitter.com/JsCHVIyCfU

Berdych committed a crucial double fault up 8-7, handing the Spaniard the break he needed to win the match.

Kuznetsova fell apart midway through the match, and in this unforgiving format, that was all enough for the Romanian needed to run away with it.

Simona Halep you are just too good on clay! Unbelievable stuff all evening to become the first EVER women's #TieBreakTens CHAMPION! pic.twitter.com/xgBKR0FG7y

Dimitrov’s dominant spot serving and soft touch allowed him play the entire tiebreak from ahead to win the trophy.