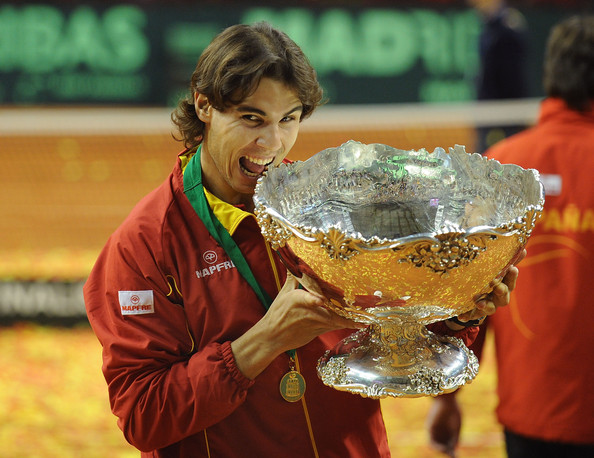 The current head of the Spanish Tennis Federation has sent out an indirect message to Rafael Nadal, warning that his fellow Davis Cup team mates are “bothered” by his absence in a competition which they feel they already have little incentive to participate in.

It is well documented that Spain have enjoyed great success in the Davis Cup in the 21st century, having won the competition five times. It is no secret that Nadal has played a huge part in leading his country to this achievement , being part of the winning team in 2004, 2008, 2009 and 2011, alongside fellow former top ten players including Juan Carlos Ferrero, David Ferrer, Fernando Verdasco and Tommy Robredo.

However, in more recent years the nation has struggled to make an impact, failing to make the semifinals of the competition since 2012. Nadal’s absence from the side has coincided with this slip in performance, which has even seen Spain drop out of the World Group back in September 2014, where they lost away to Brazil 3-1. Their relegation to Europe/Africa Zone Group 1 lasted two years before a 5-0 playoff win over India put them back in the group featuring the top 16 nations prior to the 2017 campaign.

Nadal was not present during his country’s 3-2 victory over Croatia in round one this year and more noticeably did not participate in their recent quarterfinal loss to a Serbian team led by Novak Djokovic. Given the fact that the world number two was out on court representing his country, questions have been asked as to why the 14-time Grand Slam champion was not doing battle against him.

The Spaniard has been highly critical in the past regarding the current Davis Cup format, stating that there are not enough incentives to tempt the best tennis players to compete. Miguel Diaz was appointed as the new president of the Royal Spanish Tennis Federation (RFET) last year and he shares the Spanish number one’s views on the event, but admits that all the players, including Nadal, should commit to the competition for at least a couple of weeks of the year.

Speaking to the Spanish site AS, Diaz said: “The tie (against Serbia) was caught between the middle between the end of the hard-court season and the start of the clay season. It wasn’t the best week to convince them. Even so, I thought we could count on everyone.”

In the tie against Serbia, Spain were also without their second best player Roberto Bautista Agut, leaving Pablo Carreno Busta, Albert Ramos-Vinolas, Marc Lopez and 19-year-old Jaume Munar to lead the line. Munar’s inclusion highlights the lack of depth in the squad and the lack of commitment from the other top Spanish players, baring in mind that he is currently ranked at 245th in the world.

Serbia were comfortable winners in the World Group quarterfinal, sealing victory after just two days, eventually going on to win the tie 4-1. Djokovic opened up with a straight sets win over Ramos-Vinolas, before Viktor Troicki defeated Carreno Busta in straight sets also.  The Serbs took an unassailable lead after winning the doubles rubber, with Troicki and Nenad Zimjonic ousting Carreno Busta and Lopez in a five set thriller 4-6, 7-6(4), 6-0, 4-6, 6-2.

Diaz revealed that Nadal’s absence irritates some of the other top Spanish players, who feel reluctant to fill the void. “When Rafa is not (with us) honestly, there are some players who are bothered that we bring them. Every player has his ego”, added the RFET President.

While those comments can be taken as being an attack on the 14-time Grand Slam champion, Diaz defended and also praised him. He said that his contribution to Spanish tennis means that he is virtually untouchable, given that his success has helped to inspire the next generation and fill the academies.

Recent news regarding Davis Cup reform is likely to come as welcome news to Nadal and fellow top players after the International Tennis Federation (ITF) announced in March that its Board of Directors have unanimously endorsed plans to play matches over three sets, with the ties lasting two days rather than three. These recommendations will have to be ratified by the ITF’s AGM in Vietnam in August before plans can be finalised, but many believe this is a step in the right direction with regards to preserving the success and the future of the competition.

Roger Federer: “It would be a dream for me to play a Match for Africa in South Africa”